A Solar Return chart is a chart calculated for the exact moment when the Sun returns to its natal position (within 2 days of one’s birthday). This chart can be read much like a natal chart, except that it must be kept in mind that it is in effect only for the course of a year–approximately from birthday to birthday. [Some astrologers believe the Solar Return is in effect for a longer period of time.]

It is especially important to have an accurate birth time when working with Return charts.

Note that you can create your own Solar Return chart with some key interpretations with my Zodiacal Free Chart service.

A Solar Return chart can be read in as much detail as desired. Some key points to consider are as follows:

3- Similarly, note which Solar Return planets are on or aspecting Solar Return angles. These are transits that are emphasized in the year of the Solar Return.

4- What is the condition of the Sun? Where is it located by house? (We know the sign, of course, because it will be at the exact natal position). This can show a strong area of focus for the upcoming year. The house position of the Sun in the SR chart shows where (which areas of life) the individual wants to shine. The individual will take pride in this part of his or her life, and a big ego investment lies in this area. He or she has the opportunity to rejuvenate this area. What kind of aspects does the Sun make? See interpretations of the Solar Return Sun in aspect.

6- Where is the Moon? The position of the Moon by house and sign will show where your heart is, so to speak. If, for example, the Solar Return Moon is in Libra in the 5th house, you will likely to be emotionally tied up in, and concentrated on, love and relationship. A strong need for personal self-expression will be characteristic of the year, and emotional ups and downs are likely to occur in this area of life, simply because this is where your heart isthis is the area of life that you have the biggest emotional investment inand you may not be completely rational and “in control” in this area. More than simple fluctuations will be in store in this area of life if, for example, the Moon is also forming a square to Pluto in the Solar Return chart. Profound changes are likely to occur here. Thus, factoring in the Moon’s aspects will help refine the reading. Read more about the Solar Return Moon by sign, house, and aspect.

7- Note that a Solar Return chart can be read much like a natal chart, always keeping in mind that it is transient rather than permanent. If you are interested in looking at a specific area, such as finances, you can study the Return’s second house, eighth house, and the condition of Venus. For example, if Solar Return Venus is opposite Solar Return Neptune, especially if Venus also rules the second house in the Solar Return, you might presume that either this coming year there is less emphasis on materialism, or that your income might be fluctuating and somewhat unstable.

8- Get an overall feel for the Solar Return chart by examining hemispheric emphasis, whether or not it is scattered, and which houses (angular, succedent, and cadent) are emphasized. Also, note the qualities of the dominant signs of the year (cardinal, fixed, or mutable).

For an insightful and rather thorough analysis of the Solar Return chart, look to Planets in Solar Returns: Yearly Cycles of Transformation & Growth by Mary Fortier Shea.

Let’s look at an example. The following is the natal chart of Ann: 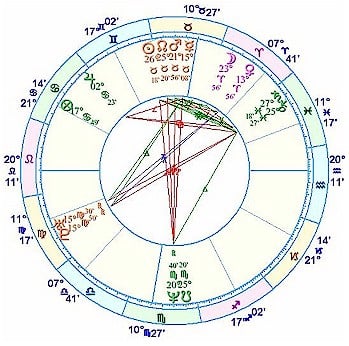 The Solar Return chart for the year we are studying is presented below, along with Ann’s natal chart in the outer wheel so that we can easily see which natal planets conjunct the Solar Return angles. 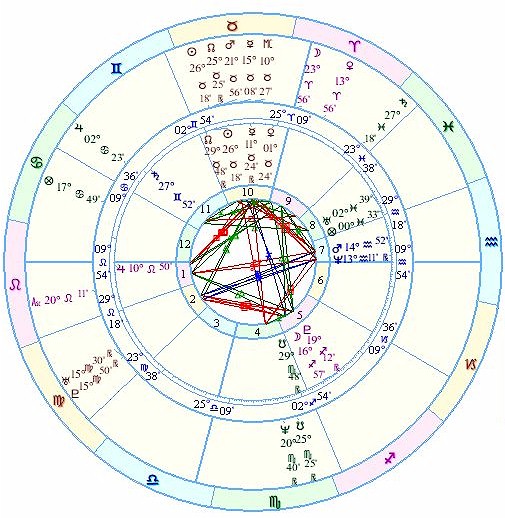 Immediately, I honed in on a few standout features involving the angles:

We also note that there is a conjunction of the Moon and Pluto in the Return chart, and that it trines SR Jupiter, and sextiles SR Mars and Pluto.

Many different issues came to the fore in the year in question. Most notably, her good friend with whom she maintained a friendship with for a few years, committed suicide and a murder on the same day. This, of course, came as a complete shock, and the violent act rocked Ann’s world. She had no clue that this man who seemed to be quite “together” could have committed such acts.

Ann, of course, struggled with this tragedy for some time after it happened. She struggled with guilt (did she ignore signs he may have been displaying?), loss (of a friendship), shock, and anger. If we had looked at the Solar Return chart before the events happened, we would not have been able to predict what actually happened. However, we may have easily seen that Ann would confront some powerful emotional issues, perhaps in a public manner (natal Moon conjunct the SR Midheaven), and that she would struggle with illusion/guilt/anger/excess with regards to her personal relationships (Mars conjunct Neptune at the Descendant). Mercury rules her natal 11th house of friendships, and it also rules her Solar Return 11th house. Mercury (both natal and Solar Return) is found in the 10th house conjunct her natal Midheaven, effectively bringing 11th house issues into the fore in a public manner.

Of course, we cannot expect something as dramatic as what happened in Ann’s life to occur as a result of the individual factors found in the Solar Return chart and noted here. For example, Neptune conjunct the Descendant in a Solar Return chart, taken alone, can very certainly represent the encountering of disillusionments in close relationships. It can also suggest a year in which the native looks for new meanings in relationships, for example.

It is interesting to find Jupiter prominent in Solar Returns and transits when, for example, a person has had an accident, or goes through something like Ann did. At first, it seems counter-intuitive because we consider Jupiter the planet of luck. Indeed, it does have a protective influence. Perhaps prominent Jupiter suggests a level of protection in the sense that the person survived the incident or crisis. Another way of looking at it is that Jupiter is the planet of expansion and excess. Effectively, it does represent some level of drama. Involved with Neptune and Mars, and we can easily see that it expanded or emphasized the Mars/Neptune issues of disillusionment. When in difficult aspect especially, Jupiter can suggest over-confidence and recklessness or misjudgment as a result.

We have Solar Return computerized reports that examine any given Solar Return chart piece by piece. We have two different styles, and each report is $4.95.