Although the most common Return charts are Solar and Lunar Returns, the Venus Return is a surprisingly revealing forecasting tool. A chart is drawn for the moment that Venus returns (each year) to its position at birth, and this Venus Return chart is then interpreted.

With the Venus Return chart, we are able to forecast the upcoming year in terms of social events and contacts, the love life, and to some extent, financial matters. Although the Venus Return happens approximately once a year, it does not occur as predictably as a Solar Return chart. If you were born mid-September, for example, your Venus Return chart may occur in September one year, October the next, July the next year, and so forth.

Key Things to Look For in the Venus Return Chart:

Of course, you can go into as much detail as you want when you are studying a VR chart. The factors above point to the more remarkable aspects in a reading.

An especially busy “Venus year” will be marked in the chart in a variety of ways. Venus might be on the Midheaven or Ascendant. Venus might be tightly conjunct the Sun and possibly another planet as well. The Return chart Vertex might be closely tied to the Nodes of the Moon (conjunct, opposite, or square) in a year when the native makes important social contacts.

Note: In my research, the Moon’s Nodes and the Vertex should not be overlooked when studying the Venus Return chart. These points are often activated and prominent in a year when the native meets a significant other (lover, marriage partner, or friend).

An exceptionally sociable year is often indicated by Venus conjunct the Midheaven in the Venus Return chart. New opportunities to socialize, as well as a fresh new social image, are indicated. A planet in tight conjunction with the Ascendant in a Venus Return chart can suggest a meaningful year as well. For example, Pluto rising in the VR chart often points to a new romance that is life-changing.

It is always helpful to look to past Venus Return charts in your own lives and those of people close to you in order to see how Venus Returns work for you. Chances are, you will come across some exciting discoveries. For example, in one case, Return Venus was conjunct the 9th house cusp in a year when the native met a love interest while traveling. In another case, the native met a person who was to become a very significant and special romantic friend when Sun, Venus, and Jupiter were all conjunct on the cusp of the 11th house in the VR chart. (These planets also formed a square with the nodal axisthe nodal axis, I have found, is a very important indicator of social contacts in the VR chart).

The following chart is the Venus Return chart of a woman in the year she met her husband. This case study is continued from our study of romantic forecasting and timing (see the article here). 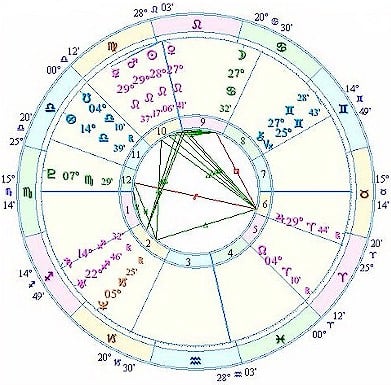 At first glance, we can see that the 10th house is very active in this VR chart. On closer inspection, we see that there are four personal planets, all within 2 degrees of each other, conjunct the Midheaven, including Venus! Venus, Sun, Mars, Mercury, and Midheaven form a close conjunction. This is an unusual and remarkable combination. If we had been looking at this VR chart in advance, we could have safely presumed that the upcoming year would be an extremely significant one, in a social/romantic sense, for the native.

If you have read our Interpreting Solar Return Charts article, you will know that I am a proponent of factoring in the natal chart into interpretations of Return charts:

The nodal axis is at early Aries and Libra, which aligns with the native’s Ascendant-Descendant axis. The natal Ascendant is effectively brought to the cusps of the 11th and 5th houses in the VR chart, at the Nodal axis.

Note also that Chiron is conjunct the Vertex in the VR chart, and that this sextiles the dramatic cluster at the Midheaven.

Timing and the Venus Return Chart

Celeste Teal, in her outstanding book Identifying Planetary Triggers: Astrological Techniques for Prediction, suggests watching Venus transits to the Venus Return chart to attempt to zero in on times when events or situations are triggered. (1) And, it works!

At the time of the actual meeting, Venus was at late Gemini, which was conjunct the Venus Return Vertex and Chiron in the 8th house (and sextile to the cluster of planets at the Midheaven).

Back to Predicting Love and Romance article.