On this second page of our Solar Returns Feature, we offer a second real-life example of a Solar Return.

The natal chart in question: 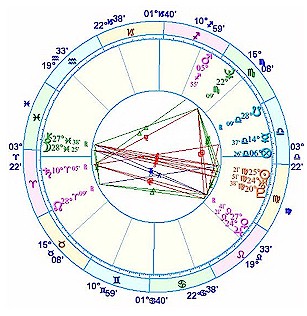 The following is the Solar Return chart for the year in question, with the natal chart in the outer ring so that we can easily see which natal planets are brought to the fore in the SR chart: 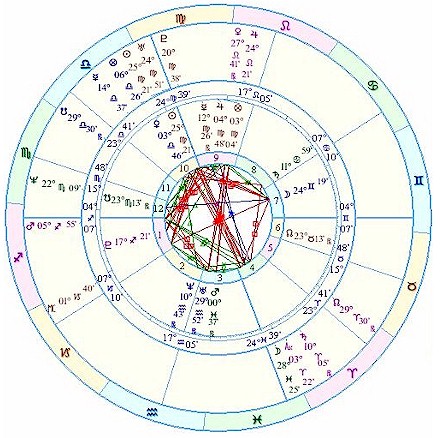 One day after this Solar Return occurred, the native had a freak accident that caused her to break her neck, fracturing her C2 bone. She effectively escaped death by a hair, and with treatment, managed to survive the accident without any nerve damage, paralysis, or any other serious consequences. However, recuperation time was lengthy, and she suffered from post-concussion syndrome as well as other “side effects” related to the accident.

We also note that SR Pluto is in the first house and loosely square the Sun as well as loosely opposing the SR Moon.

We can see from these astrological statements that this was going to be a significant year for the native! The Sun tightly conjunct the Midheaven suggests it would be a public year, so to speak. Remember that “public” will mean different things for different individuals. It does not necessarily mean one is elected to office! Certainly, the native was receiving tremendous personal attention, as family members and friends flocked around her, helping to care for her, her home, and her family while she was unable to.

When natal Mars conjuncts the SR Ascendant, we would expect Mars issues to come to the fore. Generally, we would expect that this would be a busy year. We might expect confrontations with others, although since Mars is at the Ascendant rather than the Descendant, we would also expect some enterprise and independence. However, what played out was a different side of Mars altogether. In fact, the native was less active than she ever had been as a result of the accident. Later in the year, when she resumed normal activities, she felt her life to be bustling too fast ahead of her, simply because she didn’t have the energy to keep up. She did confront powerful and personal issues of anger that seemed to surface out of nowhere, but in fact these issues were coming from within. The accident only served as a catalyst for their discovery. The sides of Mars that the native experienced were its anger, its sense of autonomy (although she had help, when it went away, she felt some anger that she was left to defend herself with less personal resources than ever), and its tendency to instigate a burnout.

Of course, this highlighted Mars can signify the accident itself! Mars is definitely associated with accidents. The ascendant represents one’s physical body. Note that SR Jupiter squares the natal Mars. In Cycles of Destiny, Ronald C. Davison writes, with reference to afflictions to and from Jupiter occurring at the time of an accident, that the native “may suffer through lack of judgment or through over-confidence that may be prejudicial to his safety”(1).

Note also that SR Mars and SR Uranus are conjunct and opposite SR Jupiter. This configuration is in direct relationship with the prominent natal Mars. Note that SR Mars and SR Uranus are conjunct in the 3rd house. These are important astrological statements. Perhaps even more interesting is the fact that Mars, Uranus, and Jupiter are all in critical degrees. Mars is at 0 degrees, Uranus is at the very end of Aquarius, and Jupiter is at 4 degrees of Virgo (a classic critical degree). As such, this configuration becomes more “weighty” and significant, and it certainly does appear to be a signature of an accident. In fact, the Solar Return Ascendant is in a critical degree at 4 degrees Sagittarius, and its ruler, Jupiter is exactly square it and also in a critical degree!

The square between SR Sun and SR Moon is tight and angular, which in and of itself promises that the year will be a critical and transitional one. Indeed it was. Issues that were signified by the other standout features of the chart were evocatively expressed as well, but, for the purpose of brevity, we will stop at the issues surrounding the accident for this study.