When Venus or Mars is in Aries, sex is best when it’s spontaneous and unrestricted. These people melt when their partner gives themselves to them innocently and purely. Some of them look for trouble in love, and are addicted to the conquest. Their heads are erogenous zones –they love it when you mess up their hair and grab their face when they are making love. They can be rather selfish in bed, and quick. They can get impatient with too much foreplay, preferring to get right to the point.

Sometimes aggressive, and generally fast, these lovers are sincere and enthusiastic in their sexual expression, but not always constant. Their desires are powerful indeed. While other signs may be most aroused by the romance of the moment,  people with this position are especially aroused by their partner’s sexual organs, plain and simple. These people fall in and out of “crush” easily–they only feel alive when they have someone to desire.

When Venus or Mars is in Taurus, the sexual nature involves all of the senses. Touch and smell are supremely important to these lovers. These are the most physical of sexual partners. No frills sex is quite fine, as long as the mood is right and there is plenty of physical contact. These lovers don’t have a reputation for spontaneity or variety, but they are good at what they do nonetheless, simply because they are truly right there with you. Abstaining is especially difficult for Taurus, so finding a regular partner is particularly important. Their sexual stamina during love-making is long-lasting and steady. Although generally patient, their style is natural and physical, and intellectualizing the sex act would only serve to baffle Taurus.

When Venus or Mars is in Gemini, use words in bed with them. Talk turns them on, and they love to kiss! Oral pleasures are extra special for these lovers. They love role-playing, as long as it is varied. They are generally fun in bed, if you can forgive their sudden bursts of speech during the act. To you, an intellectual conversation may interrupt lovemaking, but to them, it’s just extended foreplay. Sometimes given to trying too much in one session, these lovers are enthusiastic and curious about all kinds of sexual expression. Still, many people with this position are not wanton lovers. The Gemini tendency to over-think brings up all of the “buts” and “what ifs” surrounding sex. They are less driven by their desires than they are by their intellect.

When Venus or Mars is in Cancer, you’ll get one of the most sensitive and sweet lovers. When they’re not pouting, they are romantic and gooey with you. They are turned on by slave scenarios, and they may like it when you’re a little mean and aggressive in bed, as long as they know you love them. Some of them are excited with the idea of making a baby, and others just love the idea of being all yours in bed. They are known as the sign most attracted to breasts, and they might masculine and feminine stereotypes, at least in fantasy. They don’t always let you know what turns them on, and expect you to intuit their sexual needs. Their style in bed is protective and soothing; devoted and emotional. Romantic and sentimental touches add something special to the equation, especially for Venus in Cancer.

When Venus or Mars is in Leo, the fantasies often revolve around devotion and attention. These people are most turned on when their partner thinks they are gods or goddesses. Although they will take care of their partners in bed, their natural inclination is to get off themselves. Their pride in their lovemaking compels them to try to be the best in bed. While some want a mate they can show off, many prefer not to have two stars in the same household.

They can be quite possessive and jealous, although they’ll often try to hide this fact. In fact, they may put their partners to the test every now and again, and the more insecure ones will demand the world from their partners, if only to have them prove their love. They are prone to fibbing when it comes to love and sex, as they are out to impress their mates. They are attracted to inequality in sexual scenarios. However, they won’t let you always play the knave–they are attracted to seeing you in the most regal of scenarios too. It is hard for these people to separate love and sex. Even their most erotic sexual fantasies are infused with love and affection. They can sometimes come on too strong, and get impatient when their needs are not met soon enough, but you may appreciate their direct sexual expression, and their openness in bed.

When Venus or Mars is in Virgo, there is generally a healthy attitude towards sex. Sex to them is a bodily function, necessary for health and general well-being. Everyday stresses and tensions are released in sex, whether it’s with others or with themselves. They are turned on by people who have largely gone unnoticed. Simple and sweet is the way they like their bed partners. They also get turned on by the idea that they are your slave. They love doing little things for you, and get worked up when they know you appreciate all the things they do. They can be a little insecure about their own bodies, and they make up for it by paying close attention to their methods of turning you on. They are very respectful of your likes and dislikes, and focus on the things that have had the most success.

Virgo is the sign of the virgin, and this aspect gives others the idea that they are very selective. Don’t be entirely fooled by this, however. They are not as picky as they appear. In fact, they love imperfections and have the best time with a partner who needs care. They’ll make a project out of you, and you will likely never feel quite so attended to with anyone else. Their fantasies often feature the downtrodden and inexperienced. They are insatiably curious about sex, although many don’t take their curiosity much beyond fantasy. Watching and observing are especially appealing to these lovers. We are giving Virgo a little more attention than other signs simply because we feel this sign has been misunderstood on the topic of sex. They are generally not as picky and particular as their reputation says. In fact, they want to please and to be savvy in the lovemaking arena. They’ll generally “do” more than many other signs, and they’re not afraid of getting dirty either, within the confines of a healthy relationship. 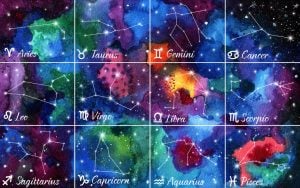 Signs of the Zodiac – Constellations

What a Man Finds Attractive in a Woman