Some of the most common questions asked of an astrologer are “When will I find love?” and “When will I marry?”

The answer, as is the case with any kind of prediction, is not clear-cut. In fact, it can be downright complicated.

This article attempts to put together some of the theories as to the timing of romantic periods in a person’s life.

The following are pointers and tips culled from my own experience, research, and astrology practice. A real-life case study is included.

Key Things to Look For:

Formulate a list of the following points and planets so that you can quickly and easily look for sensitive romantic/love times in a person’s life:

Some of these points may overlap. For example, if Venus rules the individual’s 7th house, you wouldn’t need to note down the position of Venus twice, although it is helpful to make a mental note that Venus is likely to be a particularly sensitive point.

Although squares, conjunctions, and oppositions are fairly easy to spot, the semi-square (45 degrees) and sesquiquadrate (135 degrees) are not as intuitive. In order to organize your reading, the best thing to do is to calculate a list/table as found in the case study that follows this discussion. 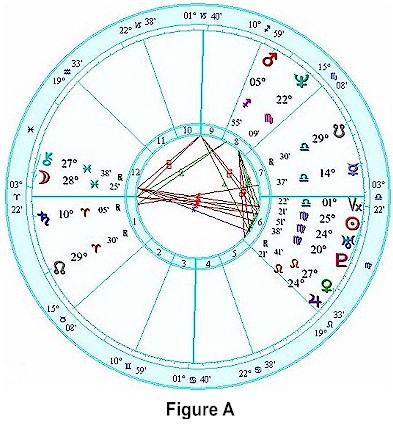 )of any chart involves taking the midpoint between the Sun and the Moon. In the example given in Figure A, the Sun is at 25 Virgo 21 (25°

When working with midpoints, the best technique to use is to first convert the positions of the planets to the 360 degree zodiac.

The following table will help you convert the degrees of the zodiac into 360 degree format:

In order to determine the midpoint of the Sun and Moon, we must add the two points together and then divide by two. A midpoint is literally the point midway between two points.

We then convert this figure back to zodiac format. Since 266 degrees is 26 degrees beyond the Sagittarius starting point, we come to the point 26 Sagittarius 53.

Because in this example the points are more than 180 degrees away when we travel through the zodiac in logical order, common practice is to convert the midpoint to 26 Gemini 53, simply because it is the closer midpoint between the Sun and the Moon. This is not highly significant in midpoint work, simply because oppositions and conjunctions are not considered to be much different when we deal with midpoints.

In order to factor in the semi-square and sesquiquadrature aspects, which are also considered hard aspects and very important in midpoint work, we can do the following:

Take the midpoint of 26 Gemini 53, and add 45 degrees to the point. We can do this by converting 26 Gemini 53 to the 360 degree format by adding 26 degrees and 53 minutes to 60 degrees, which is the starting point of Gemini as per the table above. We get:

We can note this as follows:

[If all of this sounds too technical, you might want to round your numbers to the nearest degree. For example, we might have simply added together 25 Virgo (or 175 degrees) and 28 Pisces (358 degrees), divided it in half, and found the Sun/Moon midpoint. This way, we wouldn’t have to play with minutes in addition to degrees.]

Venus. Note down the position of Venus, as this planet, whether it is connected to the 5th and 7th houses or not, is often figured in any kind of romantic predictive work. Venus, of course, is the planet of love and relationships, and is the natural ruler of the 7th house.

In our example, we have Venus at 27 Leo 41. We can calculate the 45 and 135 degree positions as well, and come up with the following for our table:

Vertex.The Vertex is a sensitive point that is often considered another Descendant. It shows up frequently when people meet significant partners. In my experience, it is often activated in progressions at these times. In our example, the Vertex (

Ruler of the 7th House. The 7th house rules close partnerships, and is an important factor to consider in our analysis. In our example, we see that Libra is on the cusp of the 7th house. The natural ruler of Libra is Venus, and since we have already included Venus in our table, we do not need to add it again. However, we can make a mental note that the importance of Venus in our analysis is stronger than usual.

Ruler of the 5th House. Because the 5th house rules, in part, romantic relationships, we look to its ruler and its activation by transit or progression in romantic predictive work. This planet will not be quite as important as the 7th house ruler, but should be considered nevertheless. In our example, we see that Cancer is on the cusp of the 5th house. The natural ruler of Cancer is the Moon, so we add the Moon to our table as follows:

North Node.  The Nodal axis has been seen to be very important in predictive work in terms of making connections with others, especially emotional and/or spiritual ones. By including the North Node only in our table, we are not giving it priority over the South Node. Because the North Node and the South Node are directly opposite each other, we will be looking for aspects to both nodes at the same time. The North Node is found at:

Now that we have collected the planets and points that we expect to be activated by transit and progression at the time of a significant romantic contact, we have completed our table:

Since this is the natal chart of the woman in our case study below, we will refer to this table again.

It is important to note that it isn’t likely that there is a “formula” for determining times when people will fall in love. This is because each of us is completely unique, and the planets and points involved in a prediction will be individual to each person. Looking to the past is generally very helpful before turning our attention to the future! Take a look at times when you met significant others in the past, and note what was happening by transit and progression.

By formulating a table of sensitive points in the natal chart as outlined above, we can then turn to the predictive techniques of transits, Secondary Progressions, and Solar Arc Directions, for periods of time when these sensitive points are activated (or “triggered”). Generally, many transits and progressions occur to these points, not just one or two.

The following chart shows a natal chart of a woman and the transit chart of the point in time when she met her husband. We are going back in time in order to see exactly what happened in the sky when this woman met her “significant other”. This will help us to look into the future and predict future attachments (the marriage was dissolved). 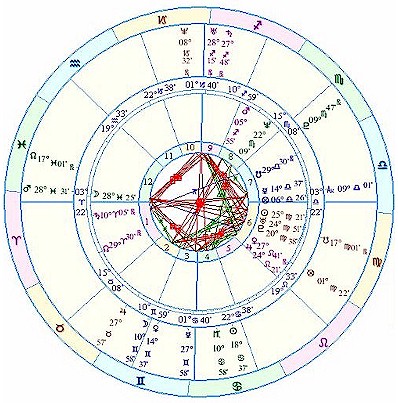 In this case, we find powerful transits to her key love significators. The theory put forth by Thomas Edward Curley, as outlined above, certainly “worked” in this case. The ruler of her 5th house, the Moon, was receiving a transiting sextile from Jupiter, and at the same time, the ruler of her 7th house, Venus, was receiving a transiting trine from Saturn. This suggests a favorable time for falling in love, and a commitment-friendly time occurring at the same time. The reality of the situation was that she met her partner and within a few months, they were married.

Her love significators are as follows:

She has Cancer on the cusp of the 5th house of romance. The natural ruler of Cancer is the Moon, which is found at 28 degrees and 25 minutes of Pisces (28°

25). Therefore, the Moon is a romance significator.

She has Libra on the cusp of the 7th house, which is ruled by Venus. Venus therefore becomes a significator of partnership, and since Venus is the planet of love, Venus is particularly important as a love significator.

53), which is very close to her Moon (and Sun). This point thus becomes a hotspot and significator.

The Descendant-Ascendant axis is an important significator in any chart. Her Descendant is 3 degrees and 22 minutes of Libra (3°

The Nodal axis often plays a role in meeting others, and hers is at 29 degrees and 30 minutes of Aries (29°

We have already formulated a table of sensitive points above.

As if these transits were not enough, transiting Pluto was forming a sesquiquadrate to both her Moon and Sun/Moon midpoint!

As well, transiting South Node was coming away from a conjunction to her natal Pluto. Although Pluto is not a romance significator, it rules her 8th house and suggests sexual activity.

I have not included Secondary Progressions here because nothing of significance was happening in this case.

In her Solar Arc Directions, Solar Arc Mars was activating (by opposition) her Sun/Moon midpoint!

It is interesting to note that her husband’s Sun/Moon midpoint is almost exactly square to her own Sun/Moon midpoint. In and of itself, it is significant in synastry. Also, the Sun/Moon midpoint of their composite chart is on the same axis, and thus was heavily activated by outer planet transits as well. The husband was also receiving heavy transits, mostly from Pluto to his Venus and Mars.

Of course, the husband’s details are of interest, but are included here only as a side note. This is because we are looking back on an event, instead of looking into the future, and if we had been attempting to predict a romantic relationship before it actually happened, we would not have known his details.

We can see from this example that transits were the major players in this relationship connection, and progressions played a minor role. This might carry forward to any predictions we might make for her future.

Now, we turn to the future and look for similar patterns. Saturn and Uranus will not be the major players in the same way, but we can certainly look for transits of the outer planets to the sensitive points in the years ahead and determine a time when these points will be heavily activated. A look in an ephemeris gleaned the following:

In late 2006, we find transiting Pluto activating the Sun/Moon midpoint by opposition. Because Pluto is slow-moving, this activation will last some time before and after this date. However, in late 2006, Jupiter will be forming a transiting trine to Moon (she had Jupiter transiting sextile to her Moon above), and Uranus transiting sesquiquadrate to her South Node. This looks interesting, so we turned to Solar Arc Directions for that time period, finding that her Solar Arc Descendant will be forming a sesquiquadrate to her Sun/Moon midpoint; Solar Arc Jupiter conjunct her natal Descendant; Solar Arc Pluto conjunct her natal South Node; and Solar Arc Saturn sesquiquadrate her natal Descendant. This looks to be a significant time when she might meet someone and fall in love (Jupiter transiting trine to the ruler of her natal 5th house, the Moon).

If we look further, we find that in mid-2007, transiting Pluto will still be transiting opposite her Sun/Moon midpoint (and square her Sun and Moon). Additionally, we find transiting Saturn conjunct her natal Venus! This suggests a commitment-friendly time. We might guess that she would meet someone and fall in love in late 2006, and then make a commitment to that person by mid-August of 2007.

Another Technique for Predicting Romance: