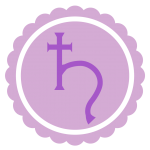 Saturn, is the ruler of Capricorn. In Greek Mythology, Cronus was one of the Titans, and the father of Zeus. Cronus ate his children to prevent himself from being dethroned as the King of the Gods. That is, until his wife, Rhea, tricked him into swallowing a stone when Zeus was born.

In astrology, Saturn is associated with restriction and limitation. Where Jupiter expands, Saturn constricts. At first blush, the themes of Saturn can seem depressing, but the planet brings structure and meaning to our world.

Saturn knows the limits of time and matter. It reminds us of our boundaries, our responsibilities, and our commitments. Essentially, Saturn brings definition to our lives. This planet, through its placement and connections in our charts, makes us aware of the need for self-control, boundaries, and limits.

Saturn is often associated with our fathers or father/authority figures. In childhood, the discipline, rules, and regulations imposed on us by our authority figures–from parents, teachers, and the like–were not always pleasant. However, they actually helped us to understand the world around us. Similarly, Saturn’s lessons help us grow, mature, and refine ourselves.

Still, Saturn’s position in our charts can help us see where we may experience energetic blocks. Facing our fears in these areas can be most rewarding–we might turn our limitations into our greatest strengths.

In the chart, the position of Saturn by sign and house reveals our own limitations, fears, and sense of responsibility. Saturn’s sign can describe how we approach our responsibilities. However, it can also point to traits that we have difficult expressing naturally–and even accepting as part of our personality.

Saturn brings definition, and often limitation (0ne would argue, some of which is quite necessary), to the planets it aspects.

Saturn in the Signs

Saturn in the Houses

Saturn’s glyph, or symbol, shows the cross of matter (reality) over the soul, representing the material nature of man reigning. Note that the symbol of Saturn is the symbol of Jupiter inverted!