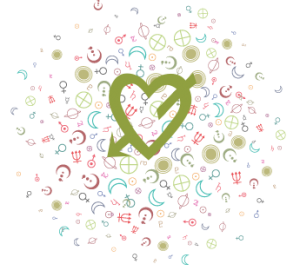 In Roman mythology, Eros was known as Cupid. “In Greek art Eros was depicted as a winged youth, slight but beautiful, often with eyes covered to symbolize the blindness of love. Sometimes he carried a flower, but more commonly the silver bow and arrows, with which he shot darts of desire into the bosoms of gods and men.” (Encarta Encyclopedia)

Eros the asteroid mostly travels within the orbit of the planet Mars.

Eros overpowers the mind with love and sex. In astrology, Eros represents sexual objectification, passion and desire, and creativity. Eros was the god of passionate and physical desire, and similarly, represents these things in an astrological chart. With Eros, the desire for something can come on suddenly and overwhelmingly. Eros can sometimes be a little reckless in pursuit of its desires.

Note that Eros is not always sexual, per se, as Eros alsorepresents creative passion and creative joy. In the chart, it can point to areas into which we pour a lot of passion–things that excite and invigorate us.

For example, someone with Eros in Virgo might be excited by nutrition, health foods, organization, sorting, and editing. However, the sign of Eros is more descriptive of how we tend to pursue our passions than it is of what excites us. Eros in Aries, then, would pursue its passion rather directly and singularly but not necessarily for a long time, while Eros in Taurus would do so more consistently.

The asteroid number assigned to Eros is #433.

Eros in the Signs

The glyph, or symbol, for Eros quite fittingly depicts a heart with an arrow through it, as Eros was Cupid in Roman mythology.