The flowers associated with Cancer are the water lily and the magnolia (depicted).

The Cancer glyph may represent the breasts as a symbol of the nurturing qualities of the sign.

The ruling planet of the sign of Cancer is the Moon, representing our deepest personal needs, basic habits and reactions, emotions, and unconscious. It's responsive, receptive, and reflective.

Cancer's element is WATER. There are three water signs: Cancer, Scorpio, and Pisces. Water signs are fluid, emotional, and intuitive.

The crab as Cancer's symbol owns a shell, and Cancer natives are self-protective and sensitive, often retreating into themselves when concerned. Crabs' behavior patterns are complex, as is the inner world of a Cancer.

Cancer's mode is Cardinal, shared with Aries, Libra, and Capricorn. Cardinal signs want action! They correspond to the beginning of each of the four seasons.

The glyph of the Moon as ruler of Cancer is depicted here. The Moon's glyph resembles the Moon itself in crescent shape form, symbolizing reception. The Moon is a lens that focuses the light of the Sun.

This is a depiction of the constellation of Cancer.

The metal associated with Cancer is elegant silver.

Cancer is related to the Pearl. Pearls symbolize integrity, loyalty, wisdom, and calm -- traits also associated with the sign.

Cancer is related to the colors Violet, Silver, and White (although not technically a color).

Cancer is associated with the angular4th house, representing our psychological foundations, roots, family, home, instinctive behavior, connection with our past, sense of security, domestic life, and real estate.

The flowers associated with Cancer are the water lily and the magnolia (depicted in the first square above).

The Cancer glyph may represent the breasts as a symbol of the nurturing qualities of the sign.

The ruling planet of the sign of Cancer is the Moon, depicted in the grid above in square three.

Cancer’s element is WATER. There are three water signs: Cancer, Scorpio, and Pisces.

The crab is Cancer’s symbol.

A crab is able to walk or run sideways. Similarly, Cancer natives can sometimes “move about” in life, in a figurative sense, in an indirect manner. The crab’s body is covered by a carapace (shell). Cancer natives are self-protective and sensitive and often retreat into themselves when hurt. Crabs are able to resist changes in the environment, thereby protecting themselves from hostile elements in various habitats. Similarly, Cancer natives are thought to avoid too much change and to be on the defensive. Crabs have “complex behavior patterns.” The inner world of Cancer natives is thought to be rather complex. Some crabs “conceal themselves by decorating their bodies with plants and animals.” Cancer natives tend to try to blend in with their environments, preferring not to make a big splash in life.

Cancer was connected to the scarab symbol to represent resurrection.

Cardinal signs want action! They correspond to the beginning of each of the four seasons.

The planetary ruler of Cancer is the Moon, and the symbol or glyph of the Moon is depicted in the grid above in square seven.

The Moon’s glyph resembles the Moon itself when it is a crescent shape. The crescent shows reception, and the Moon is a lens that focuses the light of the Sun.

The depiction of the constellation of Cancer is above in square eight. Its brightest star is Beta Cancri, but it is, overall, one of the dimmer constellations. Cancer was referred to as the Dark Sign as a result, although this reference is rarely made in current times.

Emeralds are also connected to the Cancer zodiac sign, as well as the moonstone (which is thought to help bring lovers together or back together) and Cat’s Eye.

Cancer is related to the colors Violet, Silver, and White (although not technically a color).  White symbolizes purity, innocence, and safety–keywords also associated with Cancer.

The fourth house is associated with our psychological foundations and roots, family, home life, instinctive behavior, the mother or the more “maternal” parent/caregiver, ancestry, our connection with our past, our sense of security, domestic life, real estate, and more.

The cusp of the fourth house is a special angle called the IC (Immum Coeli) and is also called the nadir.

The fourth house is an angular house. Its natural sign ruler is Cancer and its natural planetary ruler is the Moon.

Cancer is a feminine, negatively-charged, yin, or receptive sign along with Taurus, Virgo, Scorpio, Capricorn, and Pisces. Cancer is considered a highly fertile sign for planting. Its tree is the apple, Cyprus, and fir.

The body parts or anatomy associated with Cancer are the breasts and stomach or womb. When it comes to health, Cancer is associated with body fluids, protective covers in the body, and bodily “containers.” Health issues connected with the sign of Cancer include water retention and stomach problems.

Cancer is occupied by the Sun in the tropical zodiac from approximately June 22nd to July 22nd. The dates are not exact only because the exact time and sometimes date change every year. The Sun is in Cancer from approximately July 17 to August 16th in the sidereal zodiac.

The Moon is dignified in Cancer, and Jupiter is exalted in Cancer; while Mars is in its fall in Cancer and Saturn is in its detriment in the sign.

Cancer is connected to the midsummer season. The beginning of the sign of Cancer is called the Tropic of Cancer, and the Sun when here reaches its limit of north declination. The Summer Solstice also means the Sun standing still.

Where you find Cancer in the natal chart, progressed chart, election chart, or Solar Return, you are especially sensitive but tenacious. Cancer contains, protects, surrounds, and nourishes.

All About Cancer
Cancer Ascendant

Click to expand the following Cancer montage for more symbols and associations: 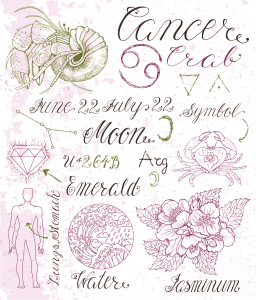 Read about the other signs of the zodiac: