Midpoints are the halfway point between two points. When astrologers talk about the Sun/Moon midpoint, for example, they are referring to the point halfway between the Sun and the Moon.

Midpoints can be calculated for any chart–whether it’s a natal chart, transit chart, progressed chart, composite chart, and so forth. They reveal further information about a chart.

Because there are many midpoints to calculate, and thus quite a bit of information to take in, it’s easiest when you have a computerized list of midpoints for a given chart, particularly if the list is sorted into zodiacal order. 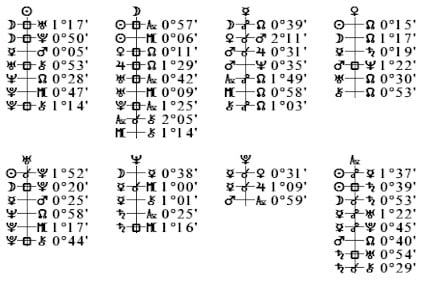 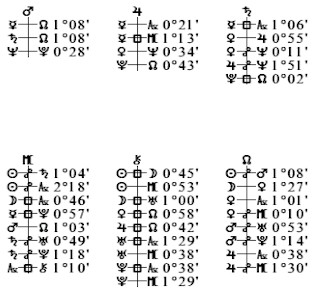 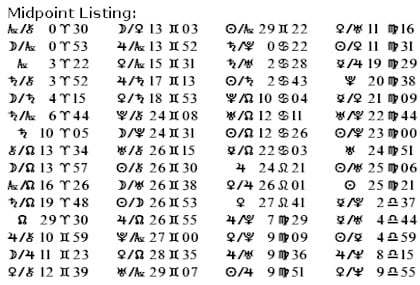 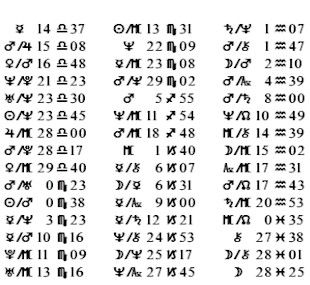 Midpoint notation involves inserting a slash between the two planets or points involved. Thus, a Sun (

The midpoint trees shown above reveal specific planets or points in aspect to midpoints. The following reveals that Mercury (

) is in hard aspect to the midpoints listed.

Because Mercury is conjunct the midpoint Venus/Mars (

), we would note this configuration as follows:

In fact, even if the aspect is an opposition, square, semi-square, or sesquiquadrature, we use the equal sign. The above example “equation” is officially called a “planetary picture“, and the diagram showing all of the midpoints in hard aspect to Mercury is a “midpoint tree“.

What is a Midpoint?

The use of midpoints historically goes back to 1200 AD when Guido Bonati, a famous Italian Astrologer, used half sums, otherwise known as midpoints, in his interpretation of a chart. More recently at the turn of the century, Alan Leo, a famous American Astrologer, used midpoints along with solar arc directions. I personally have no knowledge of the use of midpoints combined with the 90-degree dial prior to its use by Reinhold Ebertin and Alfred Witte at the beginning of the Nineteen Hundreds. The history of solar arcs on the other hand, goes back to Ptolemy who used primary directions in the second century.

A midpoint is the center between any two points, which in Astrology relates to the center between two planets and/or personal points, including the Midheaven, Ascendant, and the Nodes. This center point is the meeting of planetary energies that becomes active through the process of growth, relating to the passage of time. We relate to the aspects formed by the heavenly bodies through spatial relationship.

This system goes back to Reinhold Ebertin who, near the turn of the century, developed this system along with Alfred Witte by taking a 360-degree wheel and breaking it down into a 90-degree dial. Ebertin believed that hard aspects created events in one’s life; thus, the use of the 90-degree dial became a viable tool for forecasting future events.

This system can be seen on the 90 degree dial as 0 to 30 degrees as Cardinal, 30 to 60 degrees Fixed and 60 to 90 degrees as Mutable positions for the planetary points to be placed in accordance of their quality.

There are two midpoints that are exactly opposite one another for every pair combination of planets and points. The figure below gives you an idea of why this is the case: 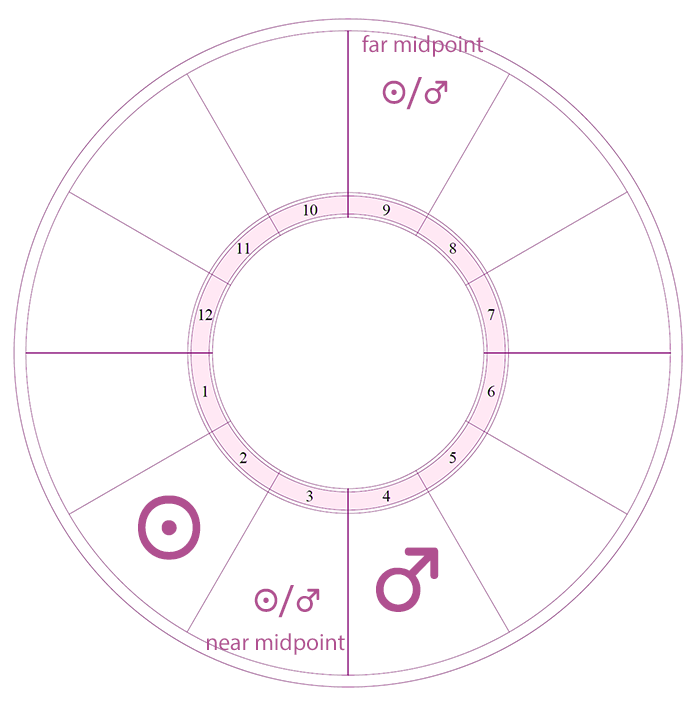 A near and far midpoint

How do we go about interpreting the midpoints?

It is not a challenging task, by all means, if you are familiar with the symbolism of the planets and points involved. The Venus/Mars midpoint can represent many things. It can represent the coming together of male and female, and can literally symbolize sex in a romantic context, since the female and male sexual archetypes combine, or come together, at the midpoint of Venus and Mars. Reinhold Ebertin in his most influential book, The Combination of Stellar Influences, referred to the Venus/Mars midpoint as “the impulse to love” and “passion”, amongst other things. In Midpoints: Unleashing the Power of the Planets,

Michael Munkasey offers many possible interpretations of the midpoint, as well as interpretations of planets and points at the midpoint. His interpretation of Mercury at the Venus/Mars midpoint is, “Discussions about your need for satisfaction from love and sex; communication about male and female roles in life; dialogues on the beauty of speed or acceleration; you find pleasure in observations”.

With Mercury = Venus/Mars in my chart, there is no doubt that I think about, and communicate about, relationships a great deal–the focus of this site is a testament to this fact!

On our Midpoint Pictures Interpretation page, planetary combinations of three planets are interpreted. There, Mercury-Venus-Mars means: “You have excellent aptitude for understanding the arts, and you are talented in artistic areas as well. You enjoy making things that are beautiful, and you succeed in areas that require an aesthetic sense as well as technical ability. You also have some talent for psychology, and you could be good as a marriage counselor, for example.”

Although it is not a challenging task to interpret specific midpoints if you are already familiar with planetary symbolism, it can be overwhelming if one were to attempt to interpret each and every midpoint in a chart. While I love the detail offered by midpoint interpretation, I use a scanning approach to midpoints in practice.

We can approach midpoint analysis from a psychological or developmental viewpoint. In a natal chart, the energies at play with a midpoint that is in hard aspect to the Sun will be very much a part of the native’s ego. The native will take pride in, and identify with, this combination of energies.

We can also approach midpoint analysis from an event-oriented or practical viewpoint. This might be especially appropriate when we consider transits to midpoints and midpoint structures. When, for example, Pluto transits opposition Mercury, we can incorporate the midpoints affected by Pluto into our analysis of the transit. Of course, we can also interpret transits to individual midpoints.

Using keywords and general knowledge of planets and points, multiple “sentences” can be constructed to interpret planetary pictures. For the midpoints themselves, we can blend the energies of both planets and points together in a similar fashion as in our interpretations of aspects between two planets. The creative side of astrology truly comes into play here. For example, with Mercury/Pluto midpoint, words like “persuasion”, “research”, “investigation”, and “obsession”, and phrases like “intense discussions” and “suspicious thoughts”, come to mind.

When I “scan” midpoint trees in a natal chart analysis, I look for planetary pictures that jump out at me. If I see, for example, Sun=Venus/Mars, and if it “fits” with the rest of my impression of the chart, I might feel that the native’s sex and romantic life forms a large part of his identity. His ego rides on his relationships. If I see Moon=Sun/Saturn, I think in terms of emotional reserve, strength, perhaps some isolation or feelings of being left out, and the taking on of responsibilities, especially with regards to family, and possibly burdensome or excessive responsibilities.

As mentioned earlier, midpoints can be listed for any type of chart. If the same planetary picture Mercury=Venus/Mars as found in the natal chart in the example  above is found in a composite chart, interpretation is similar, but instead we are interpreting a chart of a relationship, and this fact must be kept in mind.

Another issue with midpoint interpretation is that there are multiple interpretations for any given planetary picture. In this case, Mercury=Venus/Mars in the composite chart might suggest a couple who talks a lot about sex or their relationship, or it might mean that communication is a stimulant in their sexual relationship, or it could point to a rational or logical approach to romance/sex wherein the relationship is defined over and over again. Whether it points to steamy verbal exchanges or a cerebral quality to the romance we cannot say from the planetary picture alone.

The fact that there can be multiple manifestations for any given planetary picture is not limited to midpoints. In astrology, there are multiple levels, or layers, to the interpretation of any aspect, sign position, and house position. Above, I equated the Mercury=Venus/Mars midpoint in my own chart with my tendency to think about, analyze, and communicate about relationships. However, I also have Mercury=Mars/Jupiter in my chart. One might expect that I think and communicate about sports events, or religion, or that I do business in foreign trade, which I do not. Neither do I communicate in an aggressive, competitive, or especially energetic manner. Perhaps that can be explained by an opposition of Saturn to Mercury.

But what does it mean? How does it manifest? On a behavioral level, it might point to a tendency to gloss over details in order to arrive at a happy conclusion, and/or an overestimation of abilities, and/or a tendency to make decisions quickly and optimistically without considering all angles. On our Midpoint Pictures Interpretation page, Mercury-Mars-Jupiter means: “You have very good mental aptitude for many different subject areas. You are good at understanding both the general concepts and principles as well as specific details. You have a constructive mind that enables you to apply your understanding in practical ways. You can do well in an academic setting, as well as in the business and commercial world.”

In our Synastry/Relationship Astrology section of the site, we discuss the importance of the Sun/Moon midpoint in chart comparison. A personal planet in hard aspect to another person’s Sun/Moon midpoint is a rather binding contact. There is either a feeling of, or a promise of, a sense of completion from the planet person, and these contacts are very significant.

Read more about the Sun/Moon midpoint.

Many times, we can read other people through our own personal chart, since these people become the players in one’s personal “movie.” These “players” include midpoints with:

Relationships include almost any midpoint involving the Sun, Moon, Venus and Mars, combined with the personal points, Asc, Mc, Moon, and Node. We should keep in mind the rulerships of these positions.

The natal midpoints represent our birth traits, our strengths, weaknesses and potential for personal growth. Each midpoint could involve others who are part of our life path.

Thus, a natal midpoint may apply to family and friends rather than the energy being directed to the self. The timing of the events indicated by natal midpoints are activated by progressions, directions, and finally transits as the final touch-off point sometime in the future.

Astrology Topics: The Meaning of Midpoints 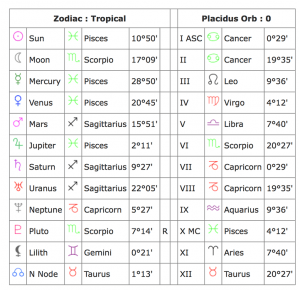 Determining a Date of Birth from Astrology Data 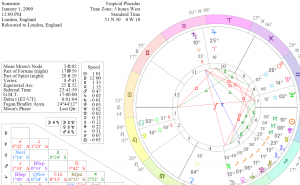 Relocation Charts: How to Calculate 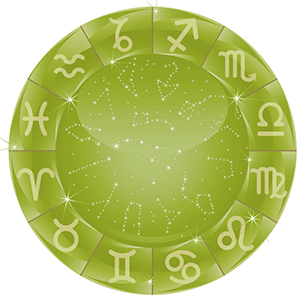 Astrology Topics – In this Section: