When You Don’t Identify with Parts of Your Natal Chart 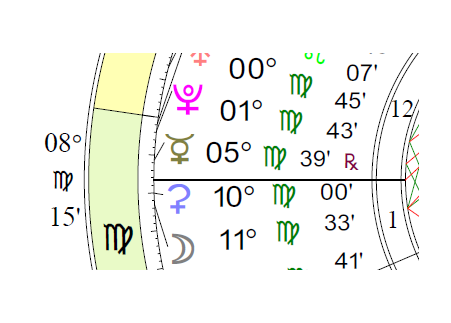 I often receive emails about failing to identify with a few of the many parts of a natal chart, on the lines of…”I identify with my Cancer Sun and Libra Moon, but Mars in Aries? It doesn’t make sense.” I also get a lot of questions about being on the cusp of a Sun sign, and identifying with one sign more than another.

I am not saying that we should try to fit a natal chart to match our traits, just to say it works. It’s about opening the mind up to the possibility that it does work if only we have the right tools to understand it.

I began to study astrology in 1979, when I was 12 years old. I had to calculate my birth chart by hand, and with limited resources. Nobody I knew had any interest in astrology beyond Sun sign astrology. Come to think of it, I didn’t know anyone who was even interested in the basics. I lived at that time in a small city in Quebec, and libraries were proportionally small and mostly in French. Coming from Ontario, I didn’t yet know enough French to “get” much from French astrology books. Needless to say, it was a challenge to construct my natal chart, and the first time I did it, it wasn’t exactly right. For about 4 months, I was looking at my slightly incorrect natal chart.

So, sometimes it has to do with a miscalculated chart. Even though charts are generally drawn up using software nowadays, sometimes something like Daylight Savings Time isn’t incorporated when it should.

More often, though, it’s about not taking into account the chart as a whole, and failing to consider other influences on the particular point in question.

Upon seeing my (correct) chart for the first time, I didn’t identify with my Aries Ascendant. Sun in Virgo, Moon in Pisces, Mercury in Libra…these worked for me. But Aries Ascendant? I was shy, sometimes painfully so, and although not exactly timid, I definitely couldn’t be described as bold, assertive, or aggressive. It was about a year before I got my hands on the book Saturn: A New Look at An Old Devil, by Liz Greene, and everything came together. I had Saturn in Aries rising, so no wonder I couldn’t identify with an Aries Ascendant. The very traits associated with Aries, such as self-confidence, assertiveness, and courage, were traits that I needed to develop (they were not coming naturally at all, which is supposed to be the case for an Ascendant sign). These were highly sensitive issues for me growing up, still are to some extent, and this can be attributed to Saturn’s position in Aries, the first house, and conjunct the Ascendant.

So, that piece of the puzzle fell into place. Any planets conjunct or aspecting the Ascendant are going to play a role in the expression of the Ascendant. The ruler of the Ascendant is also going to play a role. The same, of course, is true for the Sun, Moon, Mercury, and so forth. If your Sun is in Sagittarius, and it’s conjunct (or square, etc.) Saturn, it might be hard to identify with many of the traits associated with Sagittarius. Similarly, if your Sun is in Pisces, which is not by any means an aggressive sign, but it’s conjunct or square fiery Mars, you’re not going to identify with some Pisces descriptions like “meek” or “indirect”.

Another part of my chart that I failed to identify with was Sun conjunct Pluto, and this brings me to a few other reasons for failing to identify with some of the parts of the picture: lack of self-knowledge, lack of experience, projecting traits onto others, and misunderstanding the meaning of the energy. Failing to see the chart as a whole, which is in my opinion the biggest reason for not identifying with a particular element in the chart, is part of it, but not the only reason.

The descriptions I read for Sun conjunct Pluto didn’t work for me at all. For one, many interpretations of Sun-Pluto (or any Pluto aspect in the natal chart, for that matter) are pretty extreme. I couldn’t see myself as fanatical, power-hungry, or demanding. I didn’t have power struggles with authority figures, either. In fact, I was more often than not a teacher’s pet, I respected most rules, and didn’t ask for much from anyone. With life experience, however, Sun-Pluto themes did crop up. I stirred up a few controversies (unwittingly, I felt), had a mini power struggle with one of my principals, felt the need to leave a job because I detested the way the owner of the business treated his clients, and married a man with very strong Pluto and Scorpio in his chart.

We can repeatedly meet with energies in our chart that we don’t “own” as events or conditions we feel are outside of us. Sometimes women “disown” parts of their Sun and/or Mars, meeting them through the men in their lives; and similarly sometimes men might disown elements of their Moon and/or Venus and experience them through women in their lives. Oppositions are also especially vulnerable to this type of projection.

Also, when a personal planet or point is in hard aspect to a very slow-moving planet (Pluto, Uranus, Neptune), we’re going to meet that same natal aspect through the synastry of relationships with people in the same age group. I have Sun conjunct Pluto and Uranus, and in any relationship that I have with someone born in the year or so surrounding my birth, that person’s Pluto and Uranus will conjunct my Sun in synastry. Thus it’s going to be easy for me to see Pluto and Uranus outside of myself, as opposed to part of myself. I might easily “meet” Pluto and Uranus through others in my life who I might feel are demanding, possessive, unreliable, inconsistent, etc.

And, we don’t always see ourselves clearly! Others might see the traits we’re not identifying with much more clearly than we do. I remember hearing my relatives and friends outside of my hospital room talking. Perhaps they thought I was asleep or couldn’t hear, but either way they were talking about me in the third person! I heard such things as she’s so strong, she’ll overcome this, she’s a fighter, she won’t be down for long. Sounds pretty Sun-Pluto to me. I was thinking to myself…”who are they talking about?” Sometimes we’re so busy living inside of ourselves that it’s hard to know for certain what traits we project.

The fact that our personalities evolve over time plays a role as well. A young person’s “life story” hasn’t yet unfolded. He or she hasn’t had the chance to discover the myriad facets of his/her natal chart. When Pluto transited square to my natal Sun-Pluto, I learned a little more about my natal imprint, and I will learn more as I continue to discover myself in years to come.

I can’t count how many times I’ve received emails from people either uncertain of their Sun sign because they’re born on the cusp, or who know their Sun sign but identify more with the sign on the other side of the cusp. Almost always, a person who identifies more with the other Sun sign have other personal planets posited in the sign. For example, you might have a Taurus Sun and identify a lot with Gemini, and this could be because Mercury and Venus are in Gemini. The same is true for Ascendants. One example was a woman who identified with a Scorpio Ascendant, not the Libra Ascendant she was told she had. It turned out that she did in fact have a Libra Ascendant, but with Pluto, Scorpio’s ruler, almost exactly conjunct the Ascendant.