Let’s take a look at Mercury overlays. If your partner’s Mercury falls in your sixth house, for example, your partner has the effect of “mercurializing” (a term coined by astrologer Steven Forrest) sixth house matters in your life. The sixth house rules daily routines, health matters, and the like. It deals with the ways we organize our day-to-day life, and rules such things as making appointments, taking pills or vitamins, and other such “routines” that ensure our lives run relatively smoothly.

If your partner’s Mercury falls in your twelfth house, you might find yourself talking about personal or spiritual matters more than you would with other people. Something about your partner gives you the feeling that you are either free to discuss these things, or that you should discuss them. 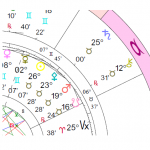 Now, the twelfth house is a tricky house when it is activated in synastry. When someone’s planet(s) fall in your twelfth house, you might feel somewhat unsettled, and you might find that your partner finds you somewhat elusive as well. Often, there is a distinct feeling of mistrust in these scenarios, especially on the part of the planet person. In our example, if your partner’s Mercury falls in your twelfth house, a rather impersonal, matter-of-fact energy (Mercury) is meeting a personal, elusive, and indefinable part of you. It is a difficult combination, because your partner is trying to get you to define, in a straightforward and matter-of-fact way, things that you feel are better left unspoken. At the very least, twelfth house matters can certainly be expressed, but not comfortably in a Mercury-energy manner. Your responses may not leave Mercury satisfied. Your partner may be puzzled as to why you don’t seem to be capable of giving straight answers. He or she may even decide that you are holding back, purposely eluding him or her, hiding something, etc. If you are involved in a deep relationship with the Mercury person, he or she may, on some level, find you vaguely untrustworthy. You might react by holding back even more, and the effect can be quite difficult. Why does your partner always seem to want you to spell things out?

The position of the Moon in a partner’s chart reveals emotional ties in the affairs of the involved house. You may even feel somewhat dependent on the person whose Moon is involved in this area of life. This area of life can also be a tricky areaone that requires special attention, sensitivity, and gentleness. If your partner’s Moon falls in your fifth house, for example, this is a romantically sensitive overlay. Your partner will have a deep need to fulfill you in a romantic, fun, and creative way. There can be a dependency on one another for romance and entertainment. One of you (perhaps more likely you) will easily become emotional, perhaps even reverting to childlike insecurity, if the other person is having fun without you. You want to be your partner’s “source” of fun and good times!

Over the years, when I was trying to grasp the significance of house overlays in synastry, I tried hard (and without much success) to find a basic or generalized “rule” as to which person (the planet or the house person) takes on which role. In synastry, when we are comparing one person’s planet/point to another person’s planet/point by aspect, it is rather straightforward to see what “role” a person takes in the “playing out” of the aspect. If my Moon squares your Mars, it is rather natural to believe that I would take on the role of the Moon, and you would take on the role of Mars, in this interplay. Sometimes, we will swing between the two roles, but for the most part, the roles are definite.

In house overlays, however, the “roles” each person plays are not quite as straightforward. If my Moon is in your 5th house, I am effectively bringing the Moon to your 5th house (“lunarizing”, as Steven Forrest would say, your 5th house), and you would be “5th house-ing”, so to speak, my Moon. The energy doesn’t go only one way! My influence on you would effectively make you emotional about your own creativity and self-expression through romance, children, entertainment, and all of those fifth house matters. In turn, you would have an effect on my emotions by enlivening them with your own special blend of creative self-expression.

In the example above with your partner’s Mercury overlaying your 6th house, your partner wouldn’t just be curious or talk about your 6th house matters, your partner’s influence would have such an effect that you would want to or feel the need to talk about your 6th house matters with him or her. Some time ago, a friend of mine was casually describing a relationship with a man that she was in at the time. She looked a bit puzzled, and said, “For some reason or another, we always end up telling each other the boring details of our day. I have never done this with anyone before!” Out of curiosity, I looked to see if any of his planets fell in her sixth. Both his Sun and his Mercury fell in her sixth house! Another friend who had written poetry for herself in private much of her life told me that she had never shared her poetry with anyone before she became involved with a particular man…whose Moon fell in her 12th house!

Although house overlays go both ways, it is helpful to remember that the planet person is impacting the house person in specific ways. The house person will see the planet person in a way that is colored by the matters and conditions of that particular house! So, as a general rule, if my Moon, for example, falls in your 4th house, you (as the house person) will see me as someone from whom you get emotional support. That is really the bottom line. Similarly, if my Sun falls in your 11th house, although we both will consider each other friends, you (as the house person) will be the one who is fixed in that impression. I will certainly react to the view you have of me, but I may eventually tire of being viewed as “only a friend”, for example, if your Sun overlays my 8th house and therefore I see you as someone with whom I want to share on an intimate, one-to-one level. You may be fine about sharing me with others, but I won’t be so thrilled with the idea of passing you around.

It can take students of astrology a bit of time to wrap their brains around the concept of house overlays in synastry. In order to get a clear understanding of the effects of house overlays (or transposed houses as they are often called), I have found it easiest to think about it this way: When somebody’s Sun or Moon (or other planet) falls in a particular house in my natal chart, it is much like that person has the effect of a permanent transit to that house in my natal chart! If your Sun falls in my eighth house, for example, when I interact with you, it is somewhat like the Sun is transiting my eighth house, highlighting and illuminating 8th house issues for me. Similarly, if my Sun falls in your third house, I have a similar effect on your life as the Sun transiting your third house.