The year ahead is strong for career, reputation, and networking, dear Scorpio. Saturn is finishing up its transit of your sign, returning to Scorpio this summer, and then moving on, not to return until 2041. This releases a lot of the direct pressure you’ve been feeling to mature, take on more responsibility, and perform.

You’ll feel this increased freedom most until June and after September. Until August, you’re in the limelight in some way. People are noticing your talents and efforts. They’re taking interest in what you’ve learned and what you can do. This can be a period of growth in your career and reputation, and while responsibilities can also increase, you’re more than willing to take them on. At the same time, you’re beginning to feel a strong need to improve and structure your finances and your natural talents. You may be feeling a pinch or a feeling of lack in these areas, and you’re likely to put more effort into making adjustments and improvements. In many ways, this is a year for building, developing, and shaping your life in concrete, material ways. Your goal is to feel more rooted and stable. Some of you have totally restructured your lives in the past year or two, and now you’re working on rebuilding it – starting from scratch in some manner.

Especially from March to June, practical matters tend to fare well. Some of you are enjoying financial improvements that come from paying more attention to downsizing, paperwork, and benefits that you’ve missed in the past. You’re being “seen” for your hard work and responsibility. Improved health and daily routines contribute greatly to your success now, and these areas improve greatly after mid-March. You continue to project an image of self-value, and others more readily put their faith in you as a result. Better relationships with health care providers and co-workers can figure strongly now. Family relationships open up with more contact, support, and attention.

During the summer months, you’ll be wise to consider the work you’ve done on your personality, image, and identity since October 2012 when Saturn first entered your sign. This is about making final adjustments and absorbing what you’ve learned. People born late in the sign of Scorpio will be feeling Saturn’s effects more acutely, and the best strategy for handling this influence is to focus on what you’re doing to make your future more secure rather than on the problems and pressures of the moment. At the end of this, ideally, you’re feeling wiser, more mature, and self-assured. You’ve learned that you can go it alone and succeed. You’re more self-reliant than you have been for some time. Venus’ retrograde from July 25-September 6 is a period of slowing down and reassessing recent advances in your career as well as partnership matters. Take in, absorb, and learn about your needs.

Now that you’ve put yourself out there, it’s time to reap the rewards and build the momentum. From August forward, and even more so from October and into 2016, you’ll be building a following for your ideas and your work. Networking is powerful at this time. Put the word out, mingle, connect, and exchange ideas for maximum success and happiness. Now that the pressure’s off your performance, you’ll feel freer to experiment. Many of you will be expanding your social life. You’re experiencing powerful belief in the future, what you have to offer others and your community, and your own dreams and hopes. Your already considerable powers of persuasion sharpen. People look to you for leadership and/or advice, although this is the case in some form throughout 2015.

Finances improve from increased responsibility and attention in the first half of the year. However, there can be some strain late in 2015, particularly if you are looking for funding for a creative project. Some of you could be feeling a pinch as your desire for pleasures and entertainment increases. Aim to simplify. Look for overlapping or unnecessary expenses and other redundancies, and aim to rid yourself of material clutter. Writing, teaching, and communicating your ideas could figure strongly in your business and may contribute more to your personal income than previously.

You’ll continue to work on letting go of baggage, both material and spiritual, and reaping the rewards of this. Mental and physical health continue to be in strong focus in 2015. However, a new trend is emerging that points you in the direction of developing friendships, sharing your expertise with others, and giving back to your community. The Solar Eclipse in March can bring a new beginning in your romantic life, with children, or a new creative direction for some. September’s Solar Eclipse serves to jumpstart a new direction on a social level. 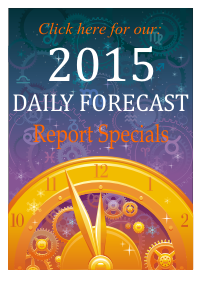