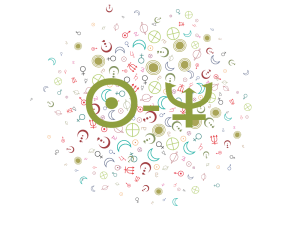 With Neptune aligned with their egos and their wills, people born under this aspect seek out some added dimension in their lives. Whether that is spiritual, artistic, or simply “different”, there is some kind of quest for higher meaning with this aspect. Neptune acts to soften the will, which can translate to a weakened willpower and susceptibility or impressionability. On the other hand, it can also signify a person who doesn’t want to be defined by the ego–someone who seeks to breakdown ego boundaries. Divine inspiration or a life of delusion? Much depends on the rest of the chart and how evolved the native is.

These people are dreamers and idealists. They resist being labeled or defined. It’s truly hard to pin these people down. Neptune acts to heighten or add a dimension to whatever planet it contacts. With the Sun, there is a need to experience something more than the simple self. Those born under a Sun-Neptune conjunction may glamorize their role in the world, or they seek to connect to something higher than themselves. They want to be something special, and it can be easy, with this sensitivity, to feel disappointed with the ordinary grind. Their memories of their lives and their experiences can be far removed from reality.

Sometimes those with this aspect have dreamy ideas about men in general. There may have been a missing or weak father figure in early childhood. The experience of this confusing figure is carried with the child through life and is partly responsible for the grown-up child’s identity problems. Sometimes it doesn’t have to do with the father or father figure specifically, but early childhood featured a confusion of boundaries or a lack of clearly defined rules or direction.

A great appreciation for music is usually present, and often for other art forms. An attraction to spiritual and metaphysical subjects is usually characteristic of these people. A distinctly emotional and sensitive personality is also common. At their best, people with Sun conjunct Neptune in their charts are very compassionate and tolerant people. They are susceptible to being led astray or used, as they too readily believe in others’ integrity.

Those people born under a challenging aspect between the Sun and Neptune often struggle with a desire to be something special or to experience something more than the ordinary. They are day-dreamers and idealists. It is easy for these people to trust others, even (and perhaps especially) people who might seem from the outside looking in as unsavory types. They are looking to identify with something beyond what is normally expected of people.

Most have in common a childhood that didn’t help the natives direct or define their lives. Perhaps the early family life was lacking in supervision or clearly defined rules. A father figure may have been absent or distant and ineffective.

Many people with these aspects have a glorified image of their fathers. Whether the image is very positive or very negative (or if it swings between these extremes), the image is not very clear or rational. Whatever the case may be, these people struggle with defining who they are. They might gravitate towards the “wrong people”, or get in with the “wrong crowd” in an attempt to define who they are. They might be susceptible to being taken advantage of by others, especially by men or authority figures. They can be easily led astray by peculiar desires or self-destructive habits.

In order to add a greater-than-ordinary dimension of experience to their lives that helps them to feel special and important, they might be attracted to Neptune-ruled behaviors, such as secret affairs, drugs, or other escapist behaviors. In some way, these people feel a strong urge to glamorize their role in the world. In extreme cases, the natives are completely deluded.

However, in most cases, there is simply some confusion about the past (such as remembering childhood experiences in ways that are far removed from reality), and a tendency to daydream about being someone more “important” than they assume they are. They may struggle with early conditioning that made them feel tossed aside or neglected in some way, and certainly not directed and supported.

These people are very sensitive, especially with regards to any real or imagined blows to their ego. If the natal chart shows a strong sense of reality and a robust mind (Mercury and Saturn well-placed, for example), the negative interpretations of this aspect are less extreme.

Still, the natives are likely to recognize at some point in their lives that they have a tendency to engage in escapist and self-destructive fantasies and/or habits. It is useful to be able to connect these behaviors with their probable source, which is likely to be a weakly-defined ego and identity in childhood.

There is an unmistakably dreamy, inspired, and sensitive side to those born with easy aspects between the Sun and Neptune. A marked appreciation for music and the arts is present. The connection of Neptune with the Sun, which represents the ego and the will, certainly softens some of the hard edges that might be found elsewhere in the chart, adding a sensitive and spiritual dimension to the personality.

These people are naturally compassionate, especially those born under the trine. It is so completely natural for them to accept that there is more to the world than what is before their eyes, that they tend to presume everyone must be spiritually-inclined. Of course, they come to realize that this is not the case at some early point in their lives. Their attraction to spirituality and metaphysical subjects is usually marked.

These aspects favor writers, artists, and musicians. These people are sensitive to those who are suffering, although they are not as easily taken advantage of as those with Sun-Moon challenging aspects. They are humanitarian and often have a special connection with animals. If other aspects and positions in the chart support it, these people are not ones to dominate others or assert themselves to the point of brashness.