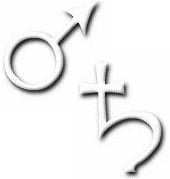 When Mars in one person’s chart forms an aspect to their partner’s Saturn, special handling is required. The hard aspects in particular can be very problematic. The conjunction of Mars and Saturn in synastry is best understood when you consider the individual energies of these two planets. The qualities of the sign that Saturn occupies points to expressions that do not come naturally to Saturn. Saturn feels awkward or inhibited expressing the energies of the sign, and often will try to compensate by trying to exercise control over these characteristics in his or her personality. In contrast, the characteristics of the sign that Mars occupies are expressed fully, naturally, and with enthusiasm! You can only imagine what this means in a relationship. If both individuals are considerate of each other, and are growth-oriented, the relationship can be a great learning experience. For example, if the conjunction occurs in Aries, the Mars individual will take action, and express his or her “me-first” tendency freely and unabashedly. Aries, quite simply, comes naturally to Mars! Saturn, on the other hand, feels unnatural expressing these traits. Perhaps Saturn feels guilty when taking the lead. Where Mars rushes right in, Saturn carefully appraises the situation before he goes into it, if he doesn’t withdraw from it altogether. Mars can have much to learn from SaturnMars can learn how to think a little before acting, and tone down his or her aggressiveness and impatience. As well, Saturn has much to learn from Mars. Saturn may secretly long to be just like Mars, going after what it wants without fear of failure.

On the other hand, if Mars is not sensitive to Saturn’s feelings of inadequacy, he or she may simply assert independence, tease Saturn for being inept or withdrawn, and run roughshod over Saturn’s feelings. Similarly, if Saturn doesn’t want to face up to his or her own feelings of inadequacy, Saturn may do everything in their power to bring Mars down, control Mars, and limit Mars’ expression.

When Mars squares, quincunxes, or opposes Saturn in synastry, this second scenario is quite likely. At the beginning of the relationship, Saturn is often unfettered by Mars’ energy, and may even find it attractive. With time, Saturn becomes annoyed with Mars’ seeming lack of discipline and “childishness”. How Saturn handles this will be very important. Unfortunately, very often the Saturn native uses subtle ways to undermine the Mars native’s confidence. Saturn attempts to control Mars by limiting, blocking, and undermining Mars. Mars feels like he or she is always in the wrong in Saturn’s eyes. When Mars laughs naturally and freely, Saturn stares at Mars with a superior look, as if Mars is being foolish. Saturn may criticize Mars for everything from the way Mars dresses to how he or she behaves with others. Saturn perceives Mars as over-confident and frivolous, gets annoyed at the drop of a hat, and lets Mars know, either with direct criticism or a general air of disapproval. For a while, Mars tries to win back Saturn’s favor. After all, the very traits that Saturn seemed to love about Mars at the beginning of the relationship have turned into things to criticize. The nature of Mars is rather aggressive, however, so this period will likely be short-lived. Mars will then become angry at Saturn for all of Saturn’s overly-serious behavior and disapproval. Mars may rebel and flaunt themselves before Saturn, which in turn makes Saturn feel all the more need to inhibit and restrict Mars. Can you see where this is going? The relationship has turned into living hell. Any latent aggressive tendencies in either individual become larger than life. At the very least, verbal abusiveness can result. Physical aggression is sometimes the next step if these discordant energies get out of hand. Eventually, Mars will want to leave, which can anger Saturn even more. These aspects require special handling, and both parties should be growth-oriented in order to manage the discordant energies.

The trine and sextile create a different energy. There is a constancy and predictability in the Saturn person that Mars finds very attractive. At restless times in our lives, however, predictability can sometimes be equated with boredom. However, much of the time, Mars takes comfort in the knowledge that Saturn’s passions are really quite constant. The Mars person knows that Saturn will be there when needed. Mars can depend on Saturn. This aspect can be a very stabilizing one. Predictability and dependability are virtues that can sometimes be overshadowed by more glamorous “features” of relationships, and it is normal for these qualities to be undervalued from time to time. However, it’s also a good idea to take the time every now and again to appreciate the overall stability of your relationship. At times, Mars may feel a little self-conscious about introducing new ways of doing things, particularly in the bedroom, as a result of Saturn’s constancy. However, Mars may be surprised to find a warm audience in Saturn, and Saturn is likely to appreciate the Mars individual’s initiative, perceiving him or her to be a masterful initiator. Much will depend, however, on the condition of Mars and Saturn natally.

CafeAstrology.com Notes: This classic by Ronald Davison presents the cross-aspects of each planet in synastry. The interpretations are insightful and warmly written.

Saturn: A New Look at an Old Devil