Farrah Fawcett met Ryan O’Neal in 1979 while she was still married to Lee Majors, and moved in with him rather quickly. They lived together until 1997, when they officially split. Farrah has said that their relationship was passionate, and their breakup was equally so, but that they were committed to a special friendship and the care of their son, Redmond. In the past years and in her final days, the deep friendship between Farrah and Ryan is evident.

Ryan has a Taurus Sun, Aquarius Moon, with Mercury in Aries, Venus in Taurus, and Mars in Aquarius. 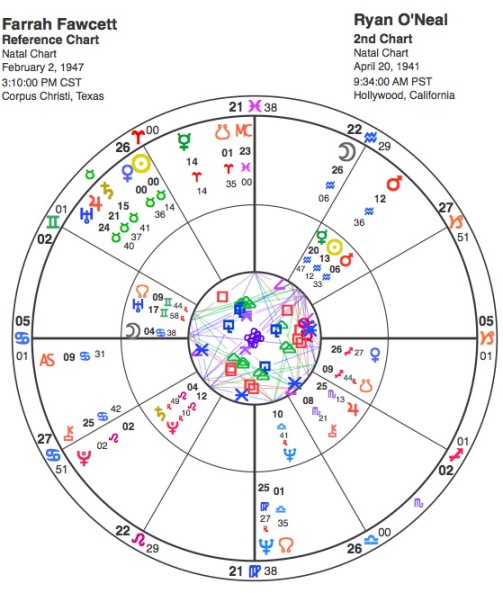 People magazine had this to say back in 1997: “But their relationship, though never sealed with a marriage certificate, seemed special. They hung together through tough times and good. They were forever, it seemed, the passionate couple who on their first date in 1979, as O’Neal later told the Los Angeles Times, “sat and kissed and kissed until our lips were bloody.””

The couple was said to have squabbled often, yet many of their friends were either surprised they split, or were confident they would get back together. And, they definitely did, although not in an official way. It was also said that Farrah did not want to get married, even though they lived much like a married couple for 17 years, keeping Ryan at a slight distance.

Here are some of the things that stand out in chart comparison, or the synastry of the relationship:

The Sun in mutual hard aspect to Mars and Saturn points to a number of challenges. There are also mutual Saturn-Pluto hard interchart aspects. Saturn plays the taskmaster role, with the “job” of making the other person aware of their responsibilities or debts. And, in this case, both Farrah and Ryan take on Saturn roles. The mutual Sun-Mars interchart aspects fire up passion and anger. The two need to be independent and/or when they are together, they need to channel the excess energy this interaction generates into activity.

Both Farrah and Ryan have strong personalities, no doubt, and each triggers the other’s more challenging natal conditions. Farrah’s Sun, for example, triggers Ryan’s natal Mars-Saturn square. Ryan’s Mars triggers Farrah’s Sun opposition Pluto. The mutual hard aspects between Venus and Mars point to passion and excitement, but not without its challenges either. These aspects combined paint an image of volatility, and passions that blow hot and cold.

Although there are many difficult interchart aspects, there are a lot of mutual ones, which creates some sense of balance. For example, Farrah’s Saturn conjuncts Ryan’s Pluto and squares his Sun and Venus. Ryan’s Saturn squares Farrah’s Sun, Mercury, and Pluto. They both take on the role of Saturn. When one person seems to take on most of the harsher outer planet roles, the inner planet owner can feel trapped and some might eventually break free. This can also be true when both take on the hard roles, let’s face it, but it seems both Farrah and Ryan have been mostly up for it, taking on the challenges.

Normally I would expect a breakup between a couple with these aspects in synastry to be bitter and difficult. However, Ryan and Farrah seemed to have risen above this very strong potential, and it’s helpful to take a look at some of the connections that seem to be the glue holding them together. 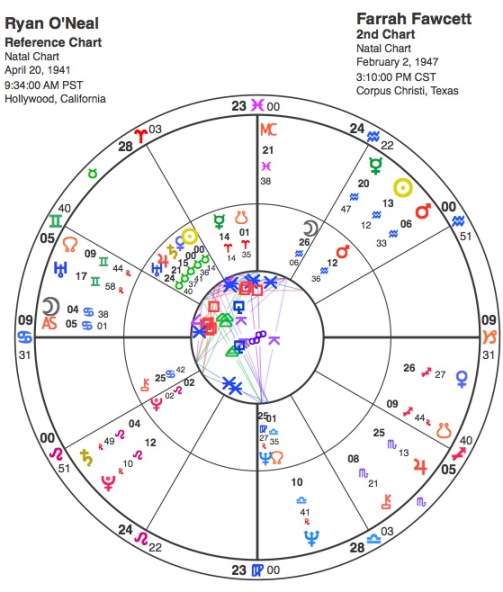 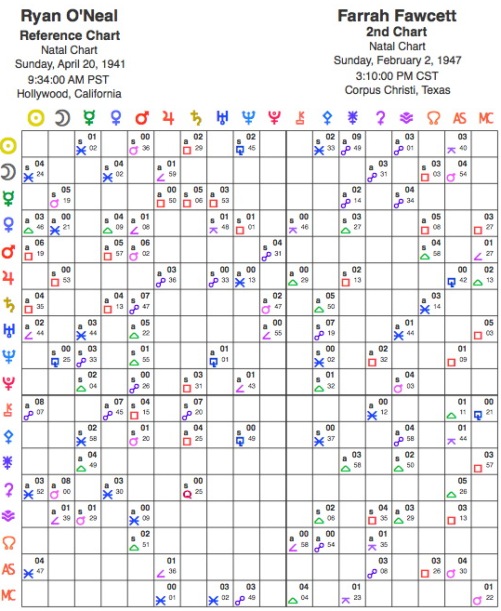 Hard aspects with Saturn definitely contribute to longevity, as long as there are strong more pleasant connections present as well. The Sun/Moon midpoint connection also contributes to longevity and commitment.

There is no doubt that Farrah touches Ryan’s life in deeply emotional ways. Most of her planets fall in his yin houses, which is a strong indication of this. Also, the Moon of the composite chart is almost exactly conjunct his Sun. Ryan is said to have given up his “playboy” ways after meeting Farrah. On the other hand, most of Ryan’s planets fall in her yang houses, many of which fall in her eleventh house. This makes it easy to understand why she resisted the marriage certificate and “kept him at a certain distance, which has kept him very interested”.

Differences in parenting styles were cited as one of the main reasons for breaking up in 1997. The quickest way to see parenting styles and how they compare in the charts is to compare Moon signs. Farrah’s Moon in Cancer is nurturing and more traditional than Ryan’s less conventional style with his Aquarius Moon. Griffin, Ryan’s son from a previous marriage, talked of life before and after Farrah moved in. Before, Griffin had very few rules to follow and a very flexible domestic “schedule”, but when Farrah moved in, she wanted supper on the table at a certain time and bedtime schedules. Nevertheless, both Farrah and Ryan have Virgo on the fourth house cusp and Neptune within the fourth, with the ruler, Mercury, in Aquarius and Aries respectively, so while there was likely an adjustment required, their needs from home life were not as dissimilar as one might expect.

It’s interesting to note that Farrah’s ex-husband, Lee Majors, has Sun in early Taurus like Ryan. 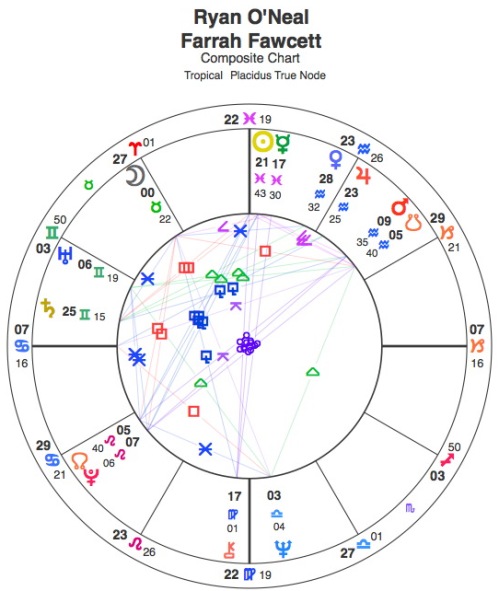 The purpose of our analyses of celebrity relationships is not to make a decision on whether or not the relationships are “good” or “bad” or whether they will stand the test of time. They serve as examples of different approaches to chart comparison for students of astrology, and serve as launching points for discussions on specific interaspects.

*Birth data for both charts courtesy of AstroDataBank. The Rodden Rating for both Farrah and Ryan is AA (BC/BR in hand).