I don’t know the statistics on this, but I definitely have seen a lot of close Saturn contacts in synastry between parent and child, where the parent’s Saturn is involved. Of the hard aspects, the conjunctions seem to naturally function better than the squares and oppositions.

My middle child, a 15 year old girl, is a Pisces with Moon in Aries. Her Aries Moon is conjunct Venus (also in Aries), and both planets conjunct my Saturn. I have to be aware of my Saturnian role with her. I look at it in this manner: One of my roles in her life is to teach her, in so many ways, to temper the more difficult expressions of her Moon-Venus in Aries, but I have to be careful not to stomp upon her enthusiasm in the process.

Every now and again she has “emotional emergencies” as I like to think of them as. When something bothers her, or she wants something, her first instinct is to freak out. She has to solve the problem right now. She has to get the thing that she wants ASAP. If she can’t find something, the whole household has to be involved in order to track it down, and she doesn’t always treat everyone in a grateful manner as she enlists (demands) our help in the search! 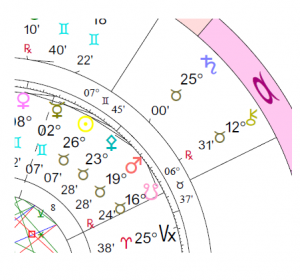 As a baby and young child, people often commented on how easy she was, describing her as gentle, patient, feminine, and quiet. I still get that kind of feedback from teachers and parents of her friends. She is a quiet person (although she speaks rather loudly when she does speak), and she’s not aggressive at all in her interactions out and about. At home, she is a leader in the household. While she needs her space and keeps to herself a fair amount, when she’s in the mood for fun, she is truly the “life of the party” in the family room. She’s hilarious and fun, outspoken and direct, and always taking the lead. She animates us, gets us the best seats for concerts (she’s totally on top of who’s coming when, pre-sales, and any other news), and is quick to do new things without instruction. She gets annoyed easily, but gets over it just as quickly. In a very general sense, I can certainly say that she is a Pisces to the rest of the world, and an Aries at home. Obviously she brings both her Sun and Moon to the table wherever she is, but one dominates in different situations. And, this is not unique to her, of course. We all express our Moon signs more when we’re comfortable, with family or others very close to us.

With her Moon-Venus in Aries on my Saturn in Aries, I have great respect for her Aries qualities that come so naturally to her. What I have to be careful of is that I let her know this, because in my Saturnian role, I might get too caught up in tempering the more negative expression of the sign–of “teaching” her or correcting her–and forget to (or even feel uncomfortable doing so) praise her for her spunk.

While Saturn conjunctions in synastry are not as challenging as squares and oppositions, they’re not as easy as sextiles and trines either. With the conjunction, the Saturn person can always seem to be the “heavy”–the one who rains on the personal planet’s parade. If we as parents are always playing the heavy role, the child is likely to be frustrated, to rebel, and to not listen to our “lessons”. With the Saturn contacts, we should be especially mindful of this.

Over the years, I have come to discover that I had often responded to my daughter’s emotional emergencies with too much reasonableness or even a holier than thou attitude. I eventually realized that this only frustrated her more. An Aries Moon person does not want to listen to reason when she/he is in a tizzy!

Where Saturn is positioned in our chart–by sign, house, and aspect–often shows qualities that don’t come naturally to us. We might secretly admire these qualities but have a hard time expressing them spontaneously, and this feeling can sometimes express itself in jealousy.

As a teenager, my Scorpio mother always seemed to me to reduce any bad situation to a situation of jealousy. I thought she went overboard with these theories back then, but grew to agree with her. She basically said that any time someone treats you poorly for no particular reason, or feels the need to nitpick and criticize you often, they’re jealous of you. They’re feeling some kind of lack in themselves. Difficult Saturn contacts in synastry very often point to jealous behaviors on the part of the Saturn person, and sometimes the not-so-difficult Saturn contacts have shades of this. The Saturn person feels a lack in him/herself, sees it expressed so easily in the personal planet person, and reactions can be critical and sometimes downright nasty.

Not many parents want to believe they can be jealous of a child’s behavior, and might instead think of their criticisms as constructive. A lot of our teachings and criticisms do stem from love, but some don’t, and that’s something to consider, especially when Saturn is strongly contacting a child’s personal planets.

If you’ve been on the receiving end of a poorly handled Saturn in synastry interaction, or a jealous person whose Saturn was in hard aspect to one of your personal planets (Sun, Moon, Mercury, Venus, or Mars), you’ll know how depressing and demotivating it can be. With my Mars in Sagittarius, I love to laugh and when I do it’s hearty and sometimes a bit out of control. A person whose Saturn squared my Mars seemed to think that it was self-indulgent, and I will tell you, there is nothing more sobering than to begin to enjoy a good laugh and to be faced with a person who looks at you like you’re absolutely crazy for doing so. He even told me that “some people’s laughs are contagious…yours isn’t”.

When my daughter was born, I had a conversation with my sister, who has the same Moon-Venus conjunction in Aries (and they both have Leo rising). I told my sister that my daughter’s chart was in some distinct ways similar to hers. My sister is very straightforward and immediately replied with, “You’re going to drive her crazy when she’s a teenager.” When asked a big WHY?, she laughed and told me, “You’re just too reasonable…you’re going to tell her to calm down at all the wrong moments…and your slow responses, poor kid”.  Yep, she was right–that’s exactly what happened when my daughter hit puberty, and it took a bit of time to figure out that even though it’s my Saturn on her Moon-Venus, I’m not the only “teacher” in the equation. She has a lot to teach me about my own fears and lacks (or perceptions of lack). I have to say that it’s easier to learn from your own child than a sibling or anyone else for that matter, I guess because there is more tolerance there, and less of an inclination to compete. My other daughter, like me, has Saturn in Aries conjunct her sister’s Moon-Venus, and the interplays between the two girls are not quite as polished! My Aries Moon daughter often tells my Aries Saturn daughter things like, “Get over yourself!”, “just do it”, and “what’s the big deal”, while my Aries Saturn daughter asks her sister why she has to be “so rude” and “so insensitive”.

I chose the title “conscious parenting” because that’s what relationship astrology can help us with–we are more conscious of why we’re reacting a certain way to a person when it’s clear they’re triggering certain hotspots in our own chart. Still, I don’t think it’s possible, or even healthy, to practice conscious parenting, or conscious relating in general, all the time. In fact, some of the most revealing lessons in life come from messy periods of trial and error. And, in fact, this is one of the lessons of Aries. Sometimes it’s better to jump in and experience things, fully confident that if we do make mistakes, we’ll be able to handle the consequences and even turn them into an advantage.