The Chinese Lunar New Year occurs every year on the New Moon of the first lunar month. The exact date can fall anywhere between late January and the middle of February. A complete cycle of the Chinese lunar calendar takes 60 years and comprises five cycles of 12 years. 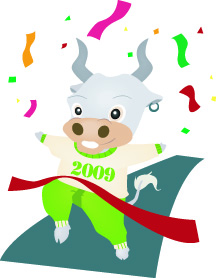 Each of the 12 years of the Chinese lunar calendar is named after an animal. These are: Rat, Ox, Tiger, Cat, Dragon, Snake, Horse, Goat, Monkey, Rooster, Dog, and Pig. Legend has it that Buddha summoned all the animals to come to see him before he departed earth. Only 12 came so he rewarded those 12 by naming a year in the Chinese lunar calendar after them, in the order they arrived to see him.

As with western astrology where it’s believed that the sun’s position at the time of an individual’s birth determines certain personality traits that a person will possess, it’s thought that each animal represented in the Chinese lunar calendar bestows certain characteristics on individuals who are born during the year that particular animal “rules.”

The Year of the Ox 2009 represents Earth on Earth, and it’s a year of hard work, productivity, and steady progress. This is not supposed to be a flashy or exciting year by all means. Rather, it’s nose to the grindstone time. Buckling up with personal finances is in order–frivolous spending is not favored. Duty and responsibility are keywords. Steady growth is indicated for those who are patient and hard-working.

The following is a description of the positive and negative personality traits of the Chinese “signs,” with a brief forecast for 2009:

Positive: Influential, sociable, imaginative, and charismatic. Rat people will always stay loyal to their friends.
Negative: Power-hungry, gossiping, indiscreet, and meddling. These individuals don’t always plan for the future.
Chinese Astrology Horoscope 2009 for the Rat: 2009 will bring changes on both professional and personal levels. Career opportunities abound, but also require commitment. Income should increase but again, input is essential–careful assessment and control of personal finances is required. New friendships and developing (or new) romances are also indicated. Overall: quite favorable.

Positive: Diligent, stable, and possesses a strong sense of purpose. These people build long-lasting friendships.
Negative: Stubborn and bigoted. Ox people aren’t often flexible.
Chinese Astrology Horoscope 2009 for the Ox: Romance will improve in 2009, and many single Oxen will discover new opportunities for love. A much steadier and more positive year is in the forecast overall. Family life is strong and even joyous. Steady progress in career is indicated. New friendships and plenty of reasons to celebrate.

Positive: Brave, strong, charismatic, and benevolent. Tigers are risk-takers and true adventurers.
Negative: Impetuous and hot-headed. These people aren’t good at taking orders from others.
Chinese Astrology Horoscope 2009 for the Tiger: As this is the year before his/her own year, 2009 can bring the Tiger some challenges, but never insurmountable ones. Avoid acting on impulse in 2009. It will be important to accept work responsibilities and to expand your knowledge set and skills base, rather than to push ahead aggressively on a professional level. Some disagreements with others could arise. Patience, controlled spending, and hard work will help Tigers to conquer any challenges that arise.

Positive: Tactful, intelligent, caring, considerate, and virtuous. Rabbit people don’t like conflict.
Negative: Pedantic and secretive. These people can appear a little cold and distant at times.
Chinese Astrology Horoscope 2009 for the Rabbit: 2009 will be favorable overall and life will be more stable. Emotions should be kept in check. It’s not a year of dramatic advancements on the job front. Rather, steady work and attention to duty pay off in small ways. Modest income increases are indicated. Social opportunities need to be sought out.

Positive: Successful, proud, lucky, and enthusiastic. Dragons are determined people and able to inspire others.
Negative: Rigid and easily infatuated. Dragon people don’t like routine.
Chinese Astrology Horoscope 2009 for the Dragon: Crucial changes are ahead in 2009. The Dragon prefers immediate or at least quick, results from his/her efforts, but the year of the Ox is one of hard work and steady progress. So, some patience needs to be cultivated. It’s not the best time to make sweeping changes or advances on the career front. It’s a good year for romance overall, although love can be complicated as well.

Positive: Intuitive, wise, perceptive, and compassionate. Snakes prefer the finer things in life.
Negative: Lazy and extravagant. These people may have a problem with depending on others.
Chinese Astrology Horoscope 2009 for the Snake: Be ready for ups and downs in 2009. The year brings a mixed bag of energies, and any complications that do arise can generally be handled successfully with a disciplined and patient attitude. All areas of life require extra effort and discipline, but particularly with regard to finances, which should be attended to vigilantly.

Positive: Popular, engaging, refined, and persuasive. Horse people are hardworking and independent.
Negative: Selfish and unscrupulous. These individuals may be rebellious and shun the advice of others.
Chinese Astrology Horoscope 2009 for the Horse: Success in career and recognition professionally can be attained in 2009. The year is a strong one in many ways, as it requires hard work and effort, which Horses are very capable of putting forth. A much more favorable year than last year is in store. Social relationships are expected to be fair, and attention is necessary to others’ feelings. Rumors or gossip could play a role.

Positive: Sensitive, imaginative, and well-mannered. Goats are peace lovers who don’t like disagreements.
Negative: Pessimistic and tardy. These people can let others take advantage of them too easily.
Chinese Astrology Horoscope 2009 for the Goat: The year of the Ox tends to be a demanding one, and rules will have to be abided by. Goats don’t always feel comfortable–in fact they could feel quite anxious–when too much is expected of them. Avoid overspending or money matters could become critical. It’s time to buckle down with money. Expect better interpersonal relationships in 2009. Because the Ox and the Goat are opposites, the year is likely to be somewhat challenging, but not overwhelming.

Positive: Very inquisitive, curious, and witty with leadership qualities. Monkeys are popular people.
Negative: Deceitful and self-absorbed. These individuals can be childish and drawn to mischief.
Chinese Astrology Horoscope 2009 for the Monkey: Travel is a good option for 2009. Monkeys will have to be more disciplined than usual in the year of the exacting Ox, particularly with money, and also with health and well-being. While 2009 is not a year of making huge strides, the social life is rewarding, family relationships satisfying, and romance is more settled and reliable.

Positive: Enthusiastic, dignified, and resilient. Roosters are well-organized and good time-keepers.
Negative: Bossy and pedantic. These people are often a little too outspoken and hate being criticized.
Chinese Astrology Horoscope 2009 for the Rooster: The Rooster’s personality is well-suited to the qualities of the year of the Ox. Work extra hard and joyous events will happen in 2009. The only thing to watch for is overconfidence and unrealistic thinking, as the Ox does not favor fanciful endeavors. Outlook for career, romance, and money look favorable, particularly if the Rooster keeps things “real”.

Positive: Intelligent, loyal, fair, and constant. Dogs are always willing to listen to others’ problems, and to fight for a good cause.
Negative: Cynical and tactless. These people don’t always forgive easily, especially those who cross them.
Chinese Astrology Horoscope 2009 for the Dog: Expect many changes in 2009. In the year of the Ox, Dogs will succeed best if they keep their expectations realistic and expect only minor improvements. This is not to say that improvements cannot be made. If Dogs work hard and take care of others’ feelings, they can overcome the obstacles and challenges that they may face.

Positive: Gallant, kind-hearted, and sincere. Pigs rarely lose their temper and always try to avoid arguing.
Negative: Materialistic and pig-headed. These individuals have a problem saying “no” — to people, and to food!
Chinese Astrology Horoscope 2009 for the Pig: Marriage and pregnancy could happen in 2009. This is a favorable year for the Pig overall. Determination and a master plan help the Pig to succeed in his/her career and with personal finances. Relationships that build gradually with modest and realistic expectations are those that will be most satisfying now.

See also: Understanding Chinese Astrology: Introduction and Chinese Astrology: More than the Twelve Animals. If you don’t know your Chinese zodiac animal, both of these articles will help you to determine it.
Try our Love Oracle, which is based on fortune-telling with playing cards. 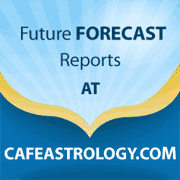 FUTURE FORECAST REPORTS:
GUIDES TO THE PERIOD AHEAD