The following are sun sign comparisons for Aries the Ram–how people born under an Aries Sun get along with other signs of the zodiac. These interpretations are written with romantic relationships in mind and are from the Romantic Compatibility Report.

Important Note: Other astrological factors modify these combinations, especially the Moon sign. For example, an Aries with a Pisces Moon is likely to behave less like the typical Aries.

Both of you are independent individuals and you don’t like feeling “owned” by anyone. Neither of you can tolerate being dominated or bossed by anyone else, so you probably make your own decisions, and direct your own lives. You respect one another’s autonomy, and a relationship that is based on constant togetherness and dependency wouldn’t suit either of you.

Sometimes, however, there is too much emphasis on individualism rather than on being close and nurturing the relationship. You both have proud egos, and are sensitive to criticism. Almost inevitably you will compete with each other, and in small doses this can be invigorating. But it easily becomes nasty, and one of you is likely to get hurt. If you’ve ever seen two rams locking horns, you know what I mean! You either respect one another immensely or detest one another – rarely anything in between.

ARIES periodically becomes gripped with an idea and feels that the time to act on this idea is NOW. TAURUS prefers to fully digest the whole idea and responds to situations with a more practical and cautious attitude. If ARIES stumbles or fails, then TAURUS may react with an “I told you so” attitude. This can be infuriating to ARIES and very detrimental to the relationship.

If you can appreciate your different approaches, TAURUS can help supply the reliability and consistent dedication needed to help bring ARIES’s ideas and impulses to a fruitful completion. Both of you should try to adapt to each other’s style in daily events: for example, TAURUS may resist a sudden impulse of ARIES to go somewhere, when joining in the fun would be much more satisfying for both of you. You have very different rhythms. ARIES is quicker but less persistent and steady than TAURUS.

You both enjoy and need to be active and on the go, and are more interested in the present than in the past. Once something has outlived its usefulness, you are both ready to part with it and you go on to something new. You both have a low tolerance for boredom! You also share a weakness in common: the inability to stick with things (projects and relationships) when they become dull or problematic. Neither of you wants a very clingy, dependent type of partner, and with one another you have a certain amount of independence that you both enjoy.

Sometimes GEMINI wants to discuss an idea, while ARIES becomes impatient with the conversation, feeling that they are beating around the bush, and not really getting to the heart of the matter. ARIES becomes abrupt, impatient, and tactless at such times. GEMINI must realize that ARIES simply does not have a taste for conversation at such times, and must not rely too much on ARIES for daily conversation. Handled positively, GEMINI can provide lots of different perspectives on ARIES’s impulsive ideas.

ARIES often feels smothered by demands of family and even friends. CANCER, on the other hand, is very devoted to family needs and the inner, emotional needs of others. ARIES may, without realizing it, selfishly accept CANCER’s nurturing and giving, while contributing relatively little to the relationship on an emotional level.

ARIES’s need for autonomy and independence often conflicts with CANCER’s needs for closeness, intimacy, and mutual dependency. ARIES seems selfish, impersonal, and indifferent to CANCER at times, and CANCER may feel too needy and emotionally sensitive compared to ARIES. ARIES can learn compassion from CANCER, and CANCER can learn to be more independent, but it’s likely to be a rough road at times with much adjustment needed on both sides.

Both of you are independent, self-motivated individuals, very much concerned with your own creative work and interests, and you prefer not to feel like you “own” each other. ARIES, however, often acts in a manner that is socially inappropriate while LEO is more aware of appearances and is more concerned with the response of others. ARIES is somewhat indifferent to other people’s opinions, while LEO craves approval and affirmation from others.

You are both immensely proud and neither of you wants to take the back seat in this relationship. There is a great deal of harmony between you, but being two spirited and somewhat volatile people, when you clash your fights are likely to be dramatic and boisterous.

Honesty and a desire for the unadorned truth are virtues you both possess and value, though VIRGO takes ARIES’s honest criticism better than ARIES takes VIRGO’s.

Some very basic differences in your makeup can make you uncomfortable with each other at times: ARIES tends to throw caution to the wind, while VIRGO worries a great deal if all details are not taken care of first. ARIES acts NOW, on impulse and intuition, while VIRGO wants to think carefully and study the fine print first.

VIRGO is the more self-analytical of the two of you and ARIES is likely to be impatient with this at times. VIRGO also tends to be more giving, and may get into the role of assistant or “servant” to ARIES. Both of you need to make a lot of adjustments in order to accommodate the differences between you. However, you can certainly learn from each other, and the differences in your personalities can be very attractive to you both.

A basic difference in your personalities is that LIBRA likes to look at both sides of an issue and consider any situation from every angle. LIBRA likes to discuss ideas with others, get their opinion, and sometimes has difficulty coming to a definitive decision. ARIES is prone to be just the opposite, taking a strong, more one-sided view of a situation and frequently is uninterested in hearing others’ point of view.

In order for your relationship to work, you will have to reconcile this basic difference in your personalities. Over time, LIBRA may feel that ARIES is a selfish egotist and ARIES may feel that LIBRA is a weak-willed wimp. Obviously, you will need to have greater appreciation and respect for each other than this! LIBRA makes many more compromises and accommodations for the relationship than ARIES does.

You are both willful and passionate people, with a strong desire to live intensely and directly, and you love this about each other. There is a lot of fire in your relationship and you are likely to fight ferociously sometimes. ARIES, however, can release anger and emotions and then forget about it, while SCORPIO nurses grudges and resentments, and may hold on to the wounds that ARIES unthinkingly inflicts.

Also, SCORPIO needs to feel intensely bonded emotionally, and ARIES may not have the same overwhelming need for closeness.

Enthusiasm, a sense of adventure, and high spirited play infuse your relationship. You both feel you can be yourselves fully with one another: you don’t have to tone down any of your exuberance and energy, the way you might with someone else. In fact, you inspire and vitalize one another’s strength.

ARIES sometimes clashes or competes with other strong individuals, but SAGITTARIUS is tolerant, not threatened, and doesn’t take the bait. Also, you both need personal freedom and space, and even if you spend all of your time together, you are unlikely to feel smothered in this relationship. A happy twosome!

Both of you are active, motivated individuals, but ARIES’s focus is more on being self-reliant, independent and personally creative, while CAPRICORN likes to follow a well-planned, stable path to success. ARIES feels very constrained and inhibited by social norms, schedules and employers, while CAPRICORN works well where there is a clear hierarchy and social order, such as in a large business, college curriculum, or military pecking order.

ARIES’s impulsiveness and indifference to social customs clashes with CAPRICORN’s conservatism sometimes. But ARIES can also give CAPRICORN sober encouragement, hope, and enthusiasm, and CAPRICORN can help ARIES organize and direct abundant energy.

Both of you are independent, active individuals who appreciate progressive, dynamic approaches to any situation or problem, and your relationship has a lively, spirited quality. You both can be iconoclasts as well, taking pride in your freedom from many traditional values and beliefs. ARIES is more concerned with personal creativity and, in some ways, less integrated into social groups and the community than AQUARIUS. You do appreciate and respect one another’s uniqueness and individuality.

ARIES is more decisive and direct, but also somewhat more naive and simple (psychologically speaking) than PISCES is. You two can balance one another nicely. ARIES depends on PISCES’s sensitivity and gentleness to soothe, heal, and provide a sanctuary from the world of competing and achieving. PISCES, on the other hand, admires and probably needs ARIES’s forthrightness, honesty, and willingness to act boldly.

PISCES is more of a giver, and can be very self-denying, while ARIES is self-absorbed, and can unintentionally take advantage of PISCES’s generosity. ARIES also lacks tact and subtlety sometimes, and inadvertently wounds PISCES’s tender feelings.

Magenta Pink is Hot – Your Sun signs are trine. Your individual emotional dispositions are similar enough to understand, and different enough to be exciting.

Crimson Red is Bang-On – You share the same Sun signs. Your emotional natures are so similar, it’s uncanny. Your relationship is very intense.

Light Purple is Harmonious – Your Sun signs are sextile. You appreciate one another’s emotional style. It’s easy to collaborate with one another.

Pink is Opposites Attract! – Your Sun signs are opposite. You find each other fascinating, frustrating, and intriguing–all at the same time!

Beige is Huh? – Your Sun signs are semi-sextile. You don’t really understand each other’s styles of expressing emotions. Your relationship requires some adjustments.

Olive is Paradox – Your signs are inconjunct. If an attraction exists, it’s magnetic and binding, but it’s hard to find the reason for it, and plenty of adjustments are necessary.

Green is Clash – Your Sun signs are square. It’s very challenging to understand each other’s styles of expressing feelings, and clashes are frequent.

Get your unique Personalized Horoscope for the year ahead—over 100 pages long—for a detailed guide to your best days and your most challenging days for attracting love, career success, communication, and more. 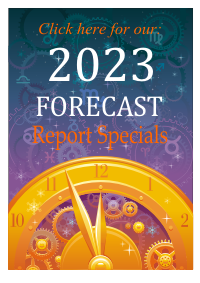