Solar and Lunar Eclipse Charts in 2015 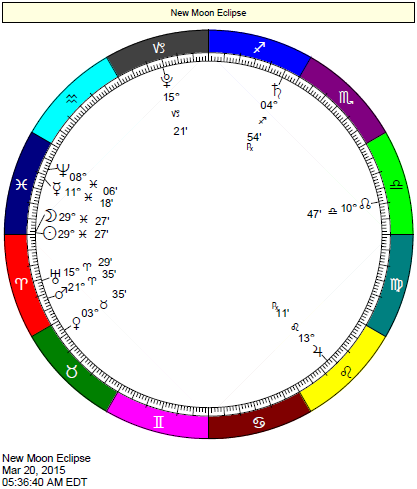 A Solar Eclipse occurs on March 20, 2015, at 29 degrees and 27 minutes of Pisces, affecting people born with personal planets and points at approximately 24 to 30 degrees of the Mutable signs (Gemini, Virgo, Sagittarius, and Pisces) and at approximately 0 to 4 degrees of the Cardinal signs (Aries, Cancer, Libra, and Capricorn) most significantly. 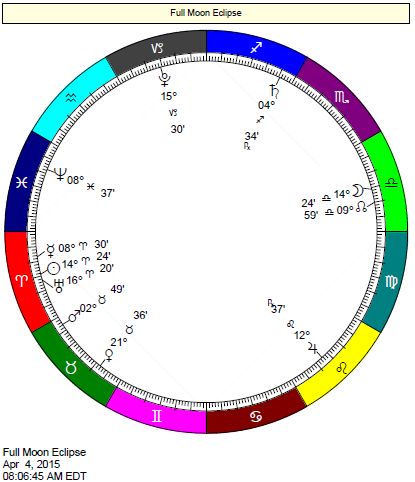 A Lunar Eclipse occurs on April 4, 2015, at 14 degrees and 24 minutes of Libra (opposite the Sun in Aries), affecting people born with personal planets and points at approximately 9 to 19 degrees of the Cardinal signs (Aries, Cancer, Libra, and Capricorn) most significantly. 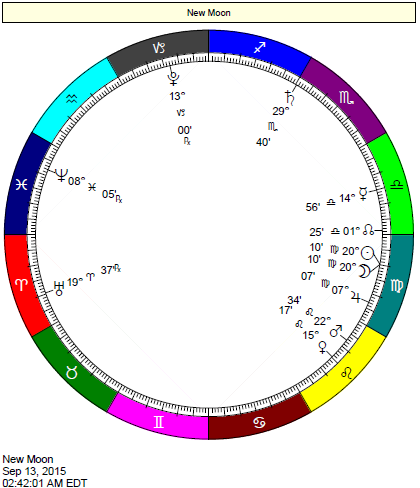 A Solar Eclipse occurs on September 13, 2015, at 20 degrees and 10 minutes of Virgo, affecting people born with personal planets and points at approximately 10 to 30 degrees of the Mutable signs (Gemini, Virgo, Sagittarius, and Pisces) most significantly. 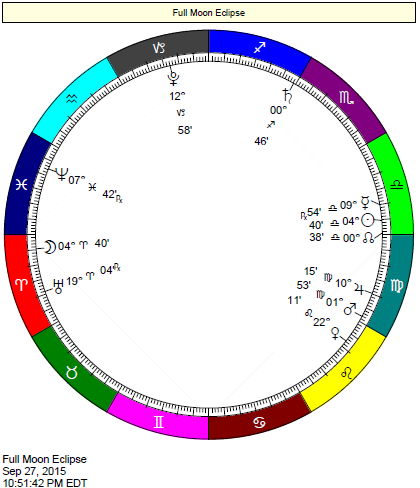 A Lunar Eclipse occurs on September 27, 2015, at 4 degrees and 40 minutes of Aries (opposite the Sun in Libra), affecting people born with personal planets and points at approximately 0 to 10 degrees of the Cardinal signs (Aries, Cancer, Libra, and Capricorn) most significantly.

Jupiter in Leo High drama, big romance, a creative bonanza: this is the stuff dreams are made of now. The world is your stage, the spotlight is your goal, and the love and appreciation of others is the air you breathe. Children, lovers, admirers: these are the people who figure large in your life as this cycle progresses. A willingness to gamble on the future.

Jupiter in Virgo “To serve and protect” is the motto that best fits the cycle that now dawns in your life. Taking better care of such material concerns as work and health becomes an article of faith. You see the big picture where these things are concerned and realize that it can only come together when all the details are in place. Sometimes, in trying to get these details all lined up, you might lose sight of your objective. Remember: Look beyond the trees to see the forest.

Saturn in Scorpio This new cycle signals a need to recognize that there are powers beyond your control, that things are not what they seem on the surface. Trying to stay in control and on top only sets you up for a fall. There is a need for the resources of others. Failure to recognize this and deal with it can stop you in your tracks.

Saturn in Sagittarius The new phase now beginning in your life brings a need to break out of narrow concepts and legalistic philosophical or religious ideas. Remember: “A foolish consistency is the hobgoblin of small minds.” Opportunities to broaden your mental horizons may not come with ease, but they are essential if you are to avoid a kind of spiritual stagnation.

Uranus in Aries A clean break with the past in some respects is signaled by the cycle you have just begun. What YOU need, YOUR freedom and independence, shattering old molds: these are the things that energize you and take priority in your life. Uniqueness and originality set you apart.

Neptune in Pisces Things spiritual and psychic take the driver’s seat of your imagination as you begin a new cycle. The fine arts and all manner of fantasies assume a larger-than-life importance. Surrendering to fate, karma, and other powers greater than merely mortal may be seen as the ultimate liberation. If all is maya (illusion), what is the reality that gives rise to the world of appearances?

Pluto in Capricorn As this new phase dawns for you, the pursuit of social/political power and status has a way of seeming necessary and inevitable – and let nothing stand in its way. It starts out small, but has bigger consequences than you’d think. Ambition, responsibility, a place for everyone and everyone in their place…

The interpretations in this box are from the Day Watch software.

What’s In Your Forecast?

Take a peek at the year ahead with in-depth Future Forecast Reports from Cafe Astrology.

Horoscopes & Forecasts – In This Section: