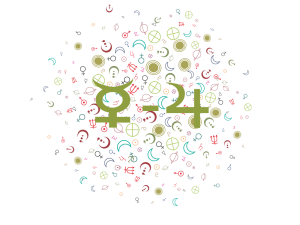 Those with a conjunction of Mercury and Jupiter in the natal chart speak warmly, grandly, and rarely sparingly! They express themselves with openness and enthusiasm (unless Saturn is involved with the aspect). They are dreamers, and often assess any given situation with perhaps too much confidence and optimism. They are natural teachers, with an unmistakable warmth and breadth of knowledge, although they can also be long-winded and come across as opinionated.

The truth is, these people are simply enthusiastic about sharing information with others. They are tolerant and broad-minded, at least in theory. Although they may come across as “know-it-alls” at times, if you dig deep, you will find they are very charitable souls with a love of learning…and perhaps even more so, a love of spreading the information they have learned.

Their thirst for knowledge is insatiable, but they often gloss over details, preferring to focus on the “big picture”. They make truly exciting conversationalists for those who tire of simple small talk. These people usually have a lot to say about religion, philosophy, the law, education–anything that involves the advancement of humanity.

Unless the conjunction is seriously afflicted, people with this aspect are generally well-respected not only for their knowledge, but for their integrity. Their wit and expressiveness are unmistakable. They are usually more than willing to lend a hand and to support others.

They visualize in broader terms and see the “big picture” rather than the picky little details. They are prone to exaggerating the facts due to enthusiasm.

People with a natal Mercury-Jupiter conjunction can be procrastinators. Although they are never short on big ideas, the implementation of these ideas (especially the detail work) might be better left to someone else. Routine, detail work, and other such “mental drudgery” is simply not their cup of tea. Even so, their enthusiasm may lead them to take on more projects than they can handle.

With an exceedingly frank and straightforward manner, these people can put their foot in their mouths often enough, as subtlety is not their strong point! (Saturn or the Moon involved with the conjunction will add subtlety and comedic talent). If they exaggerate, it is likely due to their own over-estimation and their love of entertaining others through their stories. In other words, it comes naturally and the intent is not to deceive or mislead.

You love to express your ideas, sharing them with others quite readily. Jumping to conclusions can be a problem in your life. You often overlook details, preferring to discover the “big picture” quickly. Your thinking and studying habits are not always orderly or disciplined, and this can of course result in sloppiness. Especially with the opposition, you might vacillate between logical, precise thinking and an optimistic conclusion-drawing bent of mind, and in the process, it can be challenging for you to truly get to the heart of a subject or to focus for very long. You may confuse others with a critical flaw-finding conversation one moment, and an overly faithful and unrealistic opinion the next.

While your intentions are generally good, you might overestimate what you are capable of, and promise more than you can deliver. Be careful not to develop a reputation for being unreliable, simply because you desire to make others happy with what you say or promise.

You are inclined to exaggerate, often without meaning to, and you might have a hard time putting your ideas into practice. In an attempt to attach greater meaning to your thoughts and ideas, you might frequently overstate or overestimate. You can be extraordinarily funny and interesting.

You possess an acute but disorderly mind; you can come to rapid conclusions without knowing all the facts. You must learn to be more disciplined, to concentrate more on details and to be more persistent with your projects. You are very generous and optimistic though your optimism can sometimes distance you from reality. — sample from the Adult report.

Your ideas are big and your intentions noble. You are excellent at seeing the big picture, drawing conclusions, problem solving, and making accurate observations. You love to learn, and spend your life actively absorbing information. Many of you make good teachers with your sincere love of learning and sharing ideas with others. You are also very positive in your communications, readily inspiring others with what you say and how you say it. You are skilled at turning information into an advantage, and in some ways seem to be quite lucky.

You are tolerant of other perspectives and ideas, and naturally avoid narrow-minded thinking–in fact you have a huge distaste for it. You are generally at ease conversing with people from all walks of life. You might be especially attracted to learning other languages and learning about foreign cultures. Travel is something that you are strongly attracted to.

You are very tolerant, generous and optimistic. You always see the positive side of situations and you are very respectful of the traditions and opinions of others. You have a lot of ability for organizing and planning enterprises. You enjoy traveling and any other activity that helps expand your mind. You possess an ease of communication and the facility of learning other languages. — from the Adult report.

The trine aspect is the more dynamic of the two harmonious aspects. Those with the sextile can call upon these traits when needed, and those with the trine between the Mercury and Jupiter have incorporated the traits of the aspect into their personalities, expressing them naturally and consistently.

Back to Mercury article

Don't know the position of Mercury in your natal chart? Find out how you can get your astrology chart positions free with our simple steps.