Renee Zellweger, the charismatic and hugely talented actress, met and married Kenneth Chesney, a country musician, all during the first five months of 2005. We don’t have birth times for the couple–only dates of their births, first meeting, and wedding. As such, we won’t go into an in-depth analysis of their relationship astrology, but we do provide an overview.

Some Astrological Notes about Renee and Kenneth: Renee’s Sun is in Taurus, Moon is in Leo, Mercury is in Taurus, Venus is in Aries, and Mars is in Sagittarius. We don’t know her Ascendant.

Kenneth has an Aries Sun, Pisces Moon, with Mercury in Pisces, Venus in Pisces, and Mars in Aries. Because we don’t have a time of birth, we don’t know his Ascendant. 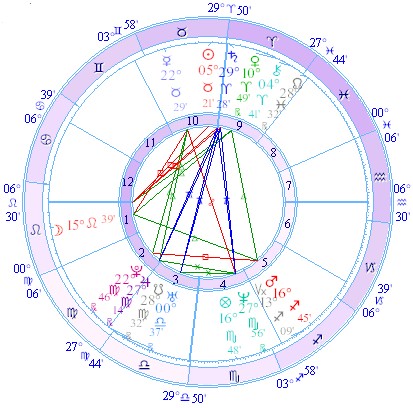 Because we don’t have a birth time for Renee, please note that we don’t know her Ascendant or house positions. The above chart is drawn for noon.

Renee has a Grand Trine in fire signs, involving the Moon, Mars, and Venus. Although she has a very earthy and practical Sun in Taurus conjunct Saturn, her emotional and intimate nature is fiery and intuitive. Emotional and romantic decisions are made quickly, spontaneously, and intuitively. With fire here, she would crave a certain level of excitement and inspiration in her personal relationships. Her Venus trine Mars suggests a healthy and natural sexiness.

With Venus, Mars, and the Moon in fire signs, she can easily jump into a relationship and think later. This is certainly not a fault, but a style. With regards to personal relationships, she needs to follow her intuition. While she is no stranger to careful deliberation and patience (Sun and Mercury in Taurus), those qualities are reserved for other areas of her life and her personality, such as in her work and with her personal goals. Emotionally and romantically, she has a Fire nature. With Venus sesquiquadrate Neptune, she needs to be careful not to glamorize her partners too much, because if she does, she sets herself up for disappointment and letdown. 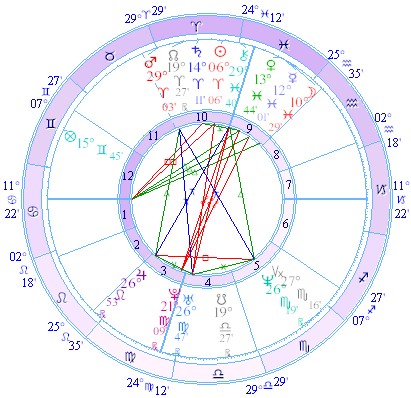 Kenneth’s noon chart, above, reveals quite a few placements of personal planets in Water signs–something that Renee lacks entirely. She might have a Water sign Ascendant, but even if she does, Kenneth’s love and emotional nature is very different than Renee’s in basic ways.

However, Kenneth’s Sun and Mars are both in Aries, so he most certainly vibrates to, and understands, the Fire energy. He has a Moon-Venus connection, as does Renee, but it is a conjunction in Pisces. In personal relationships, Kenneth is a Water-Fire type. With this combination, a relationship needs to “feel” right in order for it to be pursued. Emotionally and romantically, he is attuned to his feelings and intuition, which dominate his decisions and reactions.

The couple’s interchart aspects in synastry can be seen here, as spelled out in our Romantic Compatibility computer report. This report is shortened because we don’t know Renee’s and Kenneth’s birth times. (Normally, planets in other’s houses are included, as well as aspects involving the Ascendant). 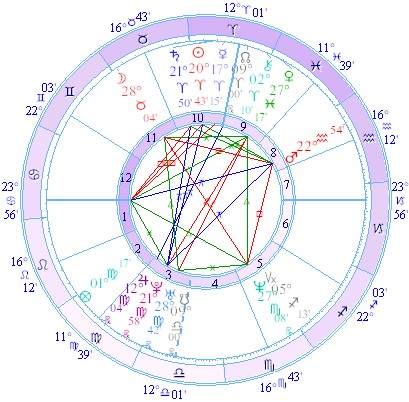 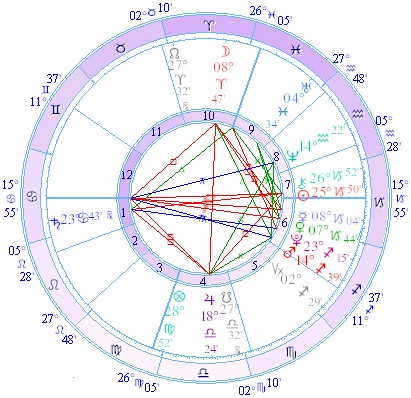 Again, we don’t know the time Renee and Kenneth met, but we can presume that the Moon was in Aries, which is especially fitting. The Moon would have activated her Venus and his Sun (their interchart Sun-Venus conjunction).

In our article, Electing a Romance, we wrote that the Moon sign for a first meeting or a first date often describes the nature of the romance. The first meeting chart is a challenging one, as the Moon applies to squares to the Sun opposition Saturn. It also opposes Jupiter. Depending on the time of day of the meeting, the Moon might also have applied to squares to Venus and Mercury. The Moon sextiles Neptune and trines Pluto–two strengthening aspects–but the “final outcome” (as shown by the final applying aspect of the Moon) is a square to the Sun, indicating basic incompatibility.

Because they got married, Renee and Kenneth’s wedding chart, which follows, would take priority over the first meeting chart. 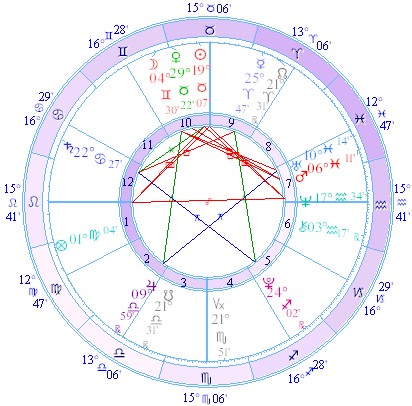 The wedding chart is certainly less challenging than the first meeting chart, but it does have its share of obstacles. The final applying aspect of the Moon is a sextile to Mercury, indicating a positive outcome, or ultimate friendly terms–whether it is considered to be a “learning experience” or long-term compatibility.

The Sun’s square to Neptune is rather tight and perhaps the most difficult aspect in the chart, suggesting some level of disappointment or letdown and miscommunication of expectations in the partnership. The trine between the Moon and Jupiter is strengthening, and the placement of the Sun and Venus in Taurus as well. Mind you, Venus in the last degree of Taurus is not ideal, simply because the placement of a planet in an anaretic degree suggests a sense of urgency and a tendency to vacillate. The fact that the wedding took place after the New Moon when the Moon is not too close to the Sun, is promising, however.