Some Astrological Notes about Angelina: Angelina is a changeable Gemini with a late Cancer Ascendant. Venus is almost exactly rising in Cancer, in a tight square with Uranus, and Jupiter is close to an exact conjunction to the Midheaven. She has an Aries Moon, which is conjunct Mars in Aries. Her Mercury is in Gemini. 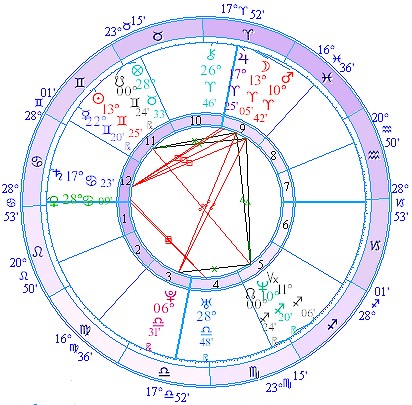 Angelina’s natal chart features two tightly angular planets: Venus in Cancer is tightly conjunct the Ascendant, and Jupiter in Aries is within half a degree of the Midheaven. Her eleventh house Sun in Gemini is on her Anti-Vertex and opposes Neptune. It also sextiles her powerful Moon conjunct Mars in Aries.

Angelina’s reputation for being both offbeat and voluptuous is perhaps perfectly summed up by her Venus in Cancer on the Ascendant, tightly square Uranus. She married actor Johnny Lee Miller in 1996, wearing a white shirt with his name written in her own blood across the back. One of her tattoos reads “A prayer for the wild at heart, kept in cages”–a Tennessee Williams quote. She performed most of her own stunts in the movie, Lara Croft: Tomb Raider. Her Moon conjunct Mars in Aries, opposite Pluto, might explain her fearless, independent nature and comfort with guns and knives. She was “into” body cutting as a teenager, speaking of it as something that made her feel alive.

Angelina married Billy Bob Thornton on May 5, 2000, and separated two years later. Their relationship was described as intense and passionate, and Angelina was quoted as saying “We love each other obsessively, madly”. Framed above Angelina and Billy Bob’s bed were the words, “To the end of time”, hand-written by Angelina in her own blood–a present to her husband. Angelina talks openly and candidly about her suicidal days as a child when she was obsessed with death, and she has a knife collection. She was put under fire with allegations that she was involved in an incestuous relationship with her brother, which the siblings officially denied.

Although she assumed she wouldn’t be a mother (“because I never felt very stable”), she was deemed a fit parent and was able to adopt a Cambodian baby boy, who she later named Maddox, while she was married to Billy Bob. She says that she always knew that if she were to have kids, she would adopt. Angelina is currently a single mother and is recently linked with Brad Pitt and Jennifer Aniston’s break-up.

Feelings of being misunderstood can most certainly be attributed to her Mercury in Cancer retrograde. Those born under a retrograde Mercury are often described as quirky because they see the world in an unusual way. Her Venus square Uranus is especially dramatic, not only because it is a tight aspect, but also because Venus is directly on the Ascendant. Furthermore, her Venus/Uranus midpoint is square her Sun, so that she identifies strongly with Venus-Uranus energies. Venus square Uranus suggests an attraction to unusual partners in love, and unusual or unconventional love affairs. With her Sun at her Venus/Uranus midpoint, this aspect of her nature becomes part of her identity and her ego rides heavily on it. There is a definite willfulness to her nature with Venus square Uranus. Sexual experimentation is also associated with the aspect.  It is interesting to note that Venus in Cancer is sentimental and attached to tradition and convention, while Uranus balks at convention, considering traditional relationships something to be avoided. Angelina would possess both of these contrasting energies, and her relationship with Billy Bob was really quite expressive of both. She expressed the devotional traits of Venus in Cancer in untraditional ways. Even her conviction that she would adopt a child is expressive of this devotional nature done a different way.

Her need to feel alive and vital, obsession with death and power, and interest in blood rituals may be expressed neatly by her Moon conjunct Mars in Aries, with her Moon and Mars on her Saturn/Pluto midpoint.

Although they weren’t married for long, her relationship with Billy Bob Thornton was an intense one. They have powerful aspects in synastry, one of which is Billy Bob’s Uranus exactly conjunct Angelina’s Venus and Ascendant. We offer their charts in synastry in another article here, as their relationship analysis is as intriguing as they were as a couple.