Angelina Jolie (see our analysis of her natal chart here) married Billy Bob Thornton on May 5, 2000, and although the marriage ended up in divorce, it was an intense partnership while it lasted. We take a look at the relationship from an astrological perspective. The astrology of attraction is fascinating, and this celebrity example is equally intriguing.

Some bio facts about Billy Bob Thornton: He was born August 4, 1955, in Hot Springs, Arkansas (we don’t know his time of birth).

Some Astrological Notes about Angelina and Billy Bob: Angelina is a changeable Gemini with a late Cancer Ascendant. Venus is almost exactly rising in Cancer, in a tight square with Uranus, and Jupiter is close to an exact conjunction to the Midheaven. She has an Aries Moon, which is conjunct Mars in Aries. Her Mercury is in Gemini.

Billy Bob Thornton has a remarkable number of planets in Leo (a stellium): Sun, Mercury, Venus, Mars, Jupiter, and Pluto. His Moon is in Leo’s opposing sign, Aquarius. 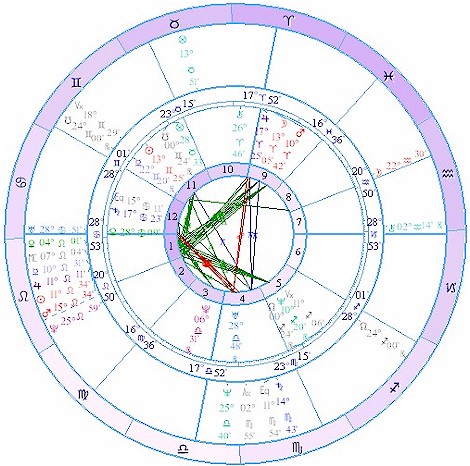 Although Angelina’s birth data is accurate, we don’t have a birth time for Billy Bob.

Billy Bob has a huge concentration of planets in Leo–a stellium–with all of his personal planets, except the Moon, in Leo. With this concentration, he is going to impact another person in a concentrated area of their charts. In the case of Angelina, the area of impact is her first house. No wonder she couldn’t keep her hands off him! His Uranus is almost exactly conjunct her Venus. In synastry, this interaspect is a major indication of attraction. The Venus person (in this case, Angelina) is utterly enthralled with the Uranus person, and relationships begin quickly with this kind of electric attraction.

The synastry between the two is remarkable. There is a Sun trine Moon, Moon trine Mercury, many sextiles involving personal planets, and more. Angelina’s Sun/Moon midpoint at 13 Taurus 15 is activated by Billy Bob’s Sun, Mars, and Saturn. There is a two-way Mars trine Jupiter…and the list goes on! In an interview with Rolling Stone, Angelina described how she felt when she met Billy Bob, and it was a feeling of disorientation. It is no wonder at all.

The couple shared quite a few natal configurations. For example, Angelina has a Venus square Uranus aspect as a dominant aspect in her chart, and Billy Bob has Venus conjunct Uranus. Both are attracted to unconventional, exciting relationships. Both have Mars conjunct Jupiter in fire signs, indicating an insatiable appetite for adventure, activity, and sex. 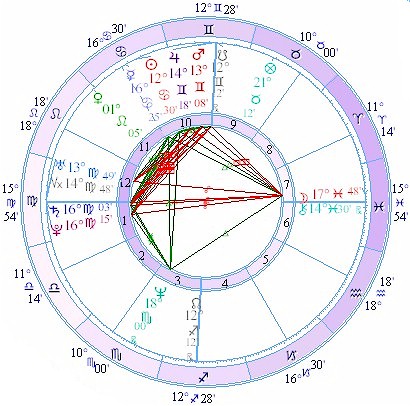 The synastry between Angelina and Billy Bob is powerful, and so is the composite chart. However, some serious clashes are most obvious in the composite chart, a chart that reveals the ultimate fate of a relationship. Mars conjuncts Jupiter–an aspect present in their individual charts–and these planets are involved in a T-square with the Moon, Chiron, Saturn, Uranus, and Pluto. The nodal axis is intimately involved with this configuration as well.

Some release from the tensions of this configuration is found in Mercury, which trines the Moon and Chiron and sextiles the volatile Uranus-Saturn-Pluto, and in Neptune, which trines Moon-Chiron and sextiles Uranus-Saturn-Pluto. The T-square is volatile in its power and in its energy. With Mercury and Neptune supporting some of the elements of the T-square (through trines and sextiles), we would expect that the couple was able to talk things out and come to some acceptance of the diverse and extreme energies present in their relationship, at least some of the time.

Uranus strongly involved with Moon, Mars, and Jupiter might have been easier to handle for the couple, as both Angelina and Billy Bob are natally “configured” to handle Uranus in relationships. However, Saturn tightly conjunct Pluto opposing and squaring these personal planets is much more challenging to come to grips with. Even though Venus looks, at first glance, to be unaspected in the composite chart, it actually semi-squares Mars-Jupiter and Uranus-Saturn-Pluto, and forms a sesquiquadrature to Moon-Chiron–Venus is involved, and in a challenging manner. All of the clashes present in the composite chart certainly were stimulating and exciting, but ultimately too demanding.

The composite chart looks to be far too taxing to support the many trines, sextiles, and positive aspects in the chemistry between the two. This suggests that although the chemistry between them was all-encompassing and remarkable, coming together as a couple was somewhat of an accident waiting to happen. The state of “being a couple” is a whole new entity with a whole set of energies, and is represented by the composite chart.

Some readers have expressed interest in the potential of a relationship between Angelina and Brad Pitt, astrologically speaking. The synastry between the two is far less striking than the example above, and not hugely binding, especially with Angelina’s Saturn on Brad’s North Node, which is often a separative aspect, and his Mercury and Mars opposing her Saturn. With many of Brad’s personal planets falling in Angelina’s 6th house, there is an imbalance present in their relationship which may, over time, be draining.

In my research, when many personal planets overlay a partner’s 6th and/or 12th house axis, there is often a feeling of not being equal–of not being peers–for whatever reason, that can eventually erode the integrity of the partnership. Interestingly, I have found this type of overlay present in relationships between mistresses and their married lovers, people who have come together when either or both have freshly separated from previous significant others, and in boss-employee romantic relationships.

The following bi-wheel chart shows Brad’s planets overlaying Angelina’s chart. Note that we don’t have a birth time for Brad, so we can safely ignore the Ascendant, Midheaven, and Vertex points in the outer ring. 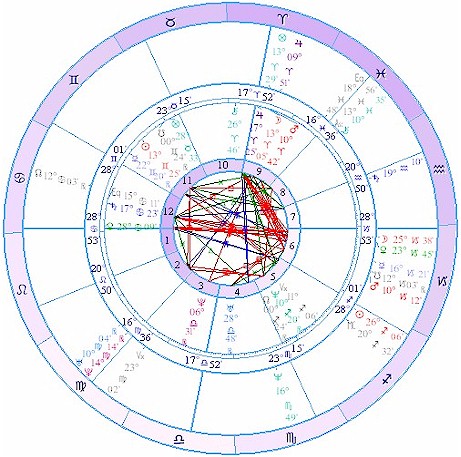