I’m going to take a little peek at the astrology of Rihanna and Chris Brown – a difficult relationship that culminated in a severe beating in 2009. I am revisiting it only because Rihanna and Chris Brown have reunited to make some songs. On her birthday this year (2012), she was releasing a remix, or extended version, of her song, Cake, with a guest who was to “shock” the world. While it wasn’t very surprising, it was rather disappointing for me to hear.

Bio facts about Rihanna: She was born February 20, 1988, in Barbados. We don’t know her birth time so I have generated a sunrise chart for her.

Some bio facts about Chris Brown: He was born May 5, 1989, in Tappahannock, Virginia (we don’t know his time of birth either – a sunrise chart is below).

Some Astrological Notes about Rihanna and Chris Brown: Rihanna is a Pisces. She has an Aries Moon, which is conjunct Venus in Aries. Her adventurous Sagittarius Mars is conjunct experimental Uranus. Chris was born under a New Moon in Taurus, with the Sun in Taurus and the Moon in Taurus, and his Venus is in Taurus as well. 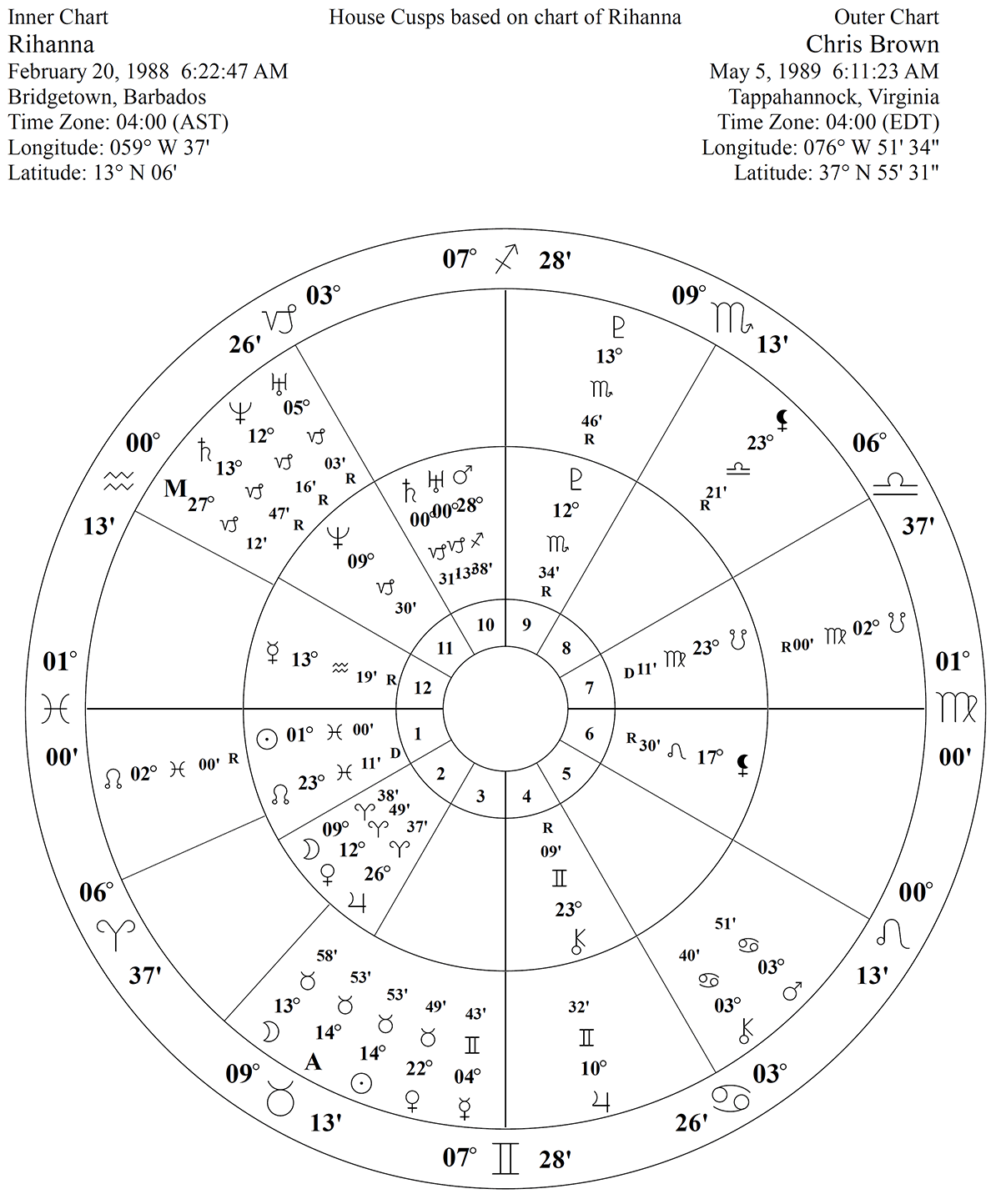 The red flags in their synastry are big ones. Chris’ Mars conjunct Chiron in Cancer opposes her Saturn, Uranus, Neptune, and Mars. Natally, Chris’ Mars opposes Uranus. Rihanna’s Venus and Moon square his Saturn and Neptune. His Sun and Moon oppose Pluto natally and Rihanna’s Pluto. These are challenging and often explosive combinations in synastry. A lot of relationship “work” would need to be done in order to handle these aspects in a healthy manner, but both parties have to very much want to do this work. Chris was born under a New Moon in the sign of Taurus, and as such he may not have the desire to truly want to learn from mistakes made, so I feel that repetition of past negative relating patterns is more likely. This is not to say that all people born with the New Moon in Taurus are arrogant and can’t learn from mistakes, as many enlightened or evolved people with this position do.

Chris and Rihanna don’t have the classic Sun and Moon contacts to one another’s Suns and Moons or Sun/Moon midpoints. Rihanna does have a hard aspect of her Moon to the composite Sun and Sun/Moon midpoint, suggesting an emotional connection or investment in the relationship itself, but not necessarily to Chris in the long term.

With the Saturn afflictions in synastry alone, we can see some big frustrations with, and reactions to, one another. I feel the Mars-Saturn hard aspects in synastry are especially difficult to deal with. The Mars person (in this case, Chris) can become extremely frustrated with the Saturn person’s reactions to his anger or assertions.

Natally, both Rihanna and Chris have strong connections between Mars and Uranus (conjunct for Rihanna, opposite for Chris). Both are risk-takers and quick-tempered people, and can be very impulsive and rash at times.

Rihanna and Chris rekindling their relationship after Chris severely beat her in 2009 is something that many feel sends a bad message to the public. In reality, abusive relationships take some time to play out, and because the relationship was terminated before it had the chance to play out, I feel the draw is about closure. My daughter relays some commentary from her classmates in high school that saddens me. Victim blaming is something that bothers me deeply, and unfortunately, there are people saying that Rihanna is “asking for it” (!?) Very challenging relationships can be a draw, but it is not in my opinion because either party is asking for abuse – it’s more about wanting to rewrite history than anything. Rihanna’s Moon-Venus square to Neptune clinches this for me. She may return to an imperfect situation, possibly over and over, just to try to make it right, to convince herself that someone really did love her, or that they really didn’t mean to hurt her. It’s about trying to make it right; trying to rewrite the story. 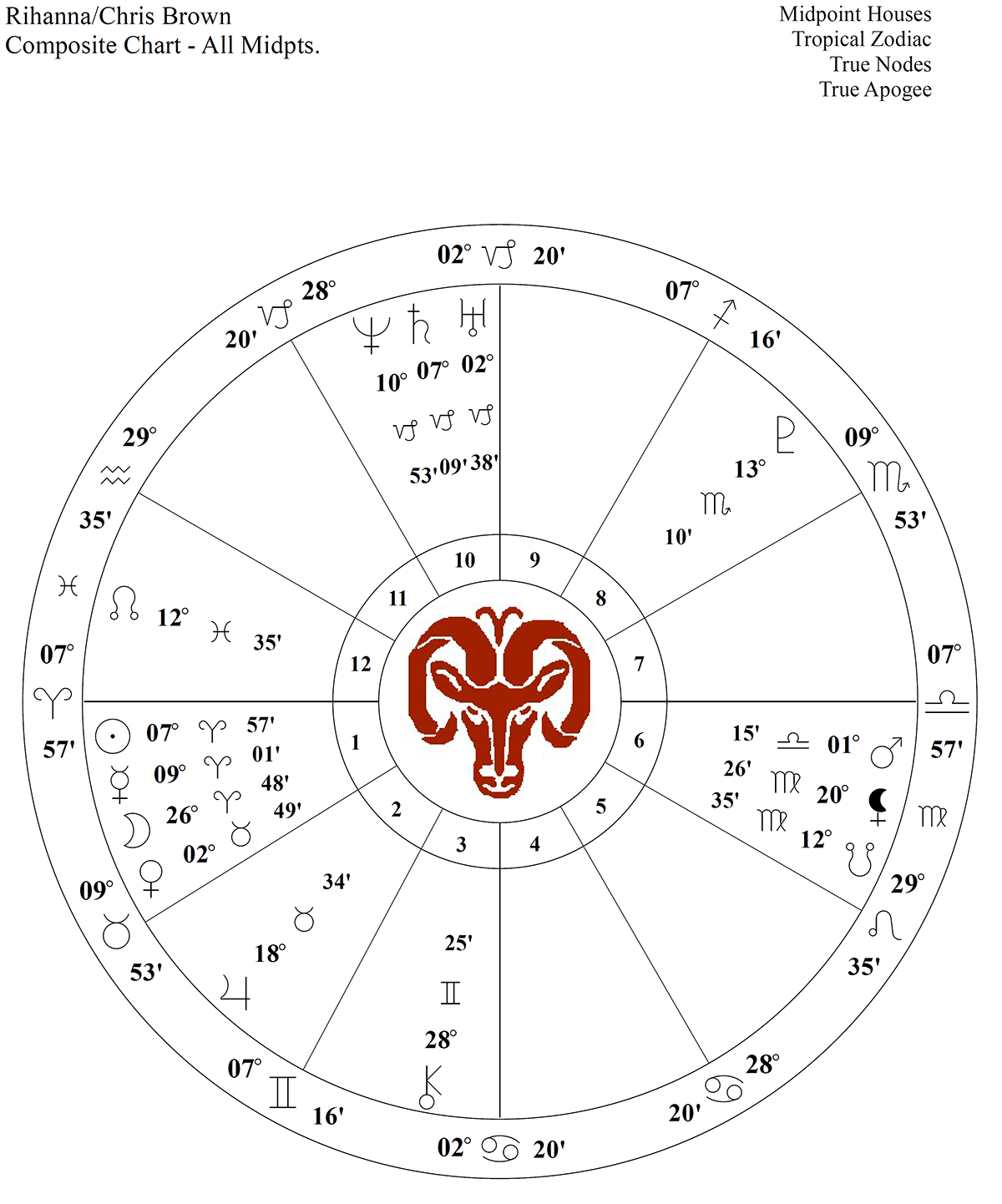 Most notable aspects in their composite chart are the Sun conjunct Mercury square Saturn, Neptune and Uranus; Mars square Uranus, Chiron, and Saturn; Venus trine Uranus and Saturn; Venus quincunx Mars. We see some pleasant influences, but mostly difficult ones.