(Please note that this article was written on February 11th, 2005, just after the couple announced their wedding plans – see note at the bottom for update).

Their wedding date was announced on February 10th, 2005: Prince Charles and Camilla Parker Bowles will take their vows on April 8th, 2005. Prince Charles is heir to the throne, but Camilla will not be Queen.

Some Astrological Notes about Prince Charles & Camilla: Her Sun is in Cancer, and she also has Moon in Cancer, Mercury in Cancer, and Venus in Cancer. The only personal planet in a sign other than Cancer is Mars. Her Mars is in Gemini and Camilla has a Leo Ascendant with Saturn rising.

Charles has a Scorpio Sun, Taurus Moon, with Mercury in Scorpio, Venus in Libra, and Mars in Sagittarius. He has a Leo Ascendant as does Camilla.

They met at a polo match when they were in their early twenties. Charles’ marriage to Diana in 1981, and Camilla’s marriage to an Army captain in 1973, did not put a halt to their romantic friendship, although the relationship is said to have had its “cooling off” moments. It is said that Camilla joked to Charles, “My great-great-grandmother was your great-great-grandfather’s mistress, so how about it?” (reference is to Alice Keppell and Edward VII). Their relationship was exposed when, in 1992, taped intimate telephone conversations were made public. Camilla divorced in 1995, and Charles in 1996. After Charles’ divorce, he admitted to adultery. 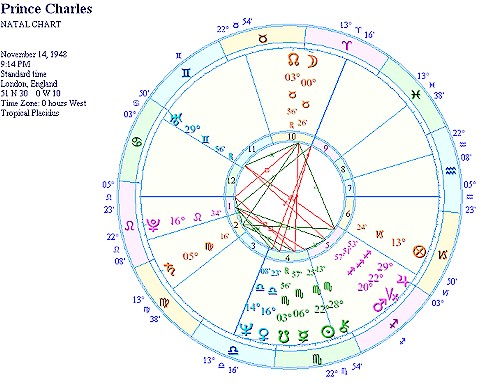 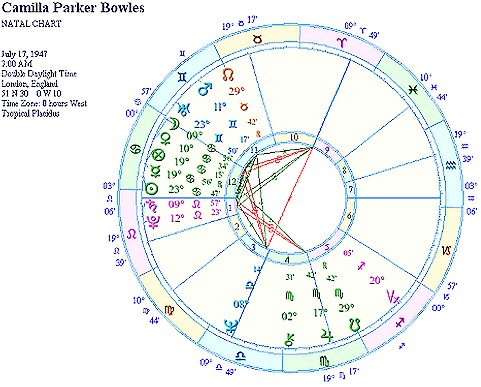 Charles’ Venus conjunct Neptune in the 4th house (conjunct the IC) is a powerful configuration, suggesting a deep-seated need for romance. It sextiles Pluto in the first. Camilla has a Venus-Moon conjunction in Cancer, square Neptune in Libra, which is conjunct the IC. These configurations are remarkably similar in energy, bearing the signature of Libra, Cancer/4th, Venus, and Neptune. Venus rules the fourth house in both Charles’ and Camilla’s chart, adding more potency to the Cancer/4th house energy.

In Camilla’s chart, the 12th house is especially strong. With Saturn rising (along with Pluto) in Leo, Camilla’s outward manner may suggest more realism than her true nature. Also quite notable is Camilla’s eastern hemisphere emphasis. Although we find so many of her personal planets in Cancer, the eastern hemisphere emphasis suggests a more individualistic and independent person than we would expect from the Cancer emphasis.

Let’s place Camilla’s planets around Charles’ chart in order to get a better idea of what she means to him. 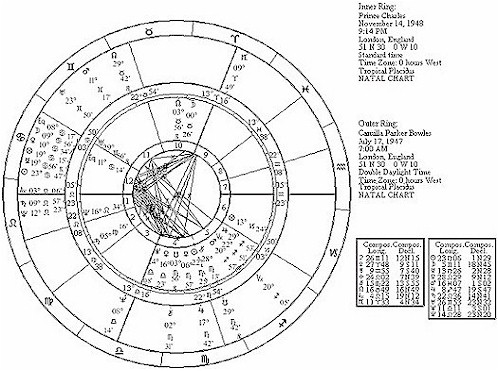 As you can see, with the exception of Mars, Camilla’s personal planets fall in Charles’ 12th house. This powerful overlay does not sit well with just anyone. Effectively, Camilla’s influence on Charles is something like a permanent and powerful transit to his twelfth house. Some people, facing this kind of influence, feel very unsettled around the planet person. Others feel touched on a spiritual level, and compelled to learn about their depths through the person who is activating their twelfth house. Often, it is a bit of both. The planet person challenges the twelfth house person, by his or her mere presence, to get in touch with his or her longings of the soul. The twelfth house breaks down ego boundaries. It represents our inner self.

With this overlay, Camilla would stir up powerful and personal depths of Charles’ personality. Of course, the twelfth house also represents secret dealings. Much of their relationship was very private–even clandestine. An overlay such as this one is probably best expressed when the relationship is, in fact, a secret affair. The fact that the relationship has endured after the affair became public is some sort of testimony to its strength. We might wonder about the effect of the official marriage on the couple’s relationship, however.

When we place Charles’ planets around Camilla’s chart (not pictured), we find that his Sun and Mars fall in her fifth house, suggesting he is what she would consider an ideal dating partner. Sexual chemistry is highlighted here. There is no doubt Camilla would find Charles exciting as a romantic partner. His Venus and Mercury fall in her fourth house, and his Moon falls in her tenth house, adding some depth to the attachment that might otherwise be considered more of a fun fling or a boost to the ego.

Camilla’s Ascendant and Charles’ Ascendant are in conjunction. Their Suns form a tight trine. Her Jupiter (which is a direct-station) conjuncts his Sun. His Chiron trines her Sun. Her South Node widely conjuncts his Sun. The Moons are compatible, although not tight enough to form a sextile. Her Moon trines his Mercury. Her Moon and Venus sextile his Saturn. His Venus trines her Mars.

Their Venuses are square. His Saturn squares her Mars–a very challenging aspect in synastry. Her Saturn conjuncts his Ascendant. 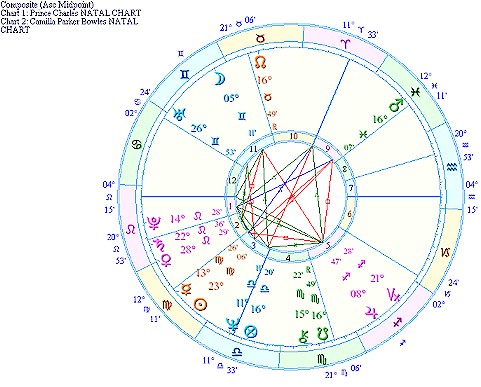 The composite chart reveals Venus conjunct Saturn in Leo in the second house. We see a fair amount of “coverage” in terms of the qualities and elements of houses and signs, although the fixed (succedent) houses are emphasized. With succedent houses strong in a composite chart, partners may easily slip into a routine with each other. They rely on one another and the partnership is often an enduring one.

The Sun square Uranus in the composite chart presents an interesting challenge, especially when the couple is married. There is an erratic quality to the partnership. Separations were certainly part of this couple’s past. In order to make a marriage work with a composite Sun square Uranus, the individuals involved must find ways to relate that are not overly binding or smothering. Independence and giving each other space are vital in a partnership with this composite aspect.

The composite Sun is found in the third house and it also falls in the third house in both Charles’ and Camilla’s natal charts. This suggests that the couple finds purposefulness and meaning to the relationship in communication and busy togetherness.

There are truly not as many connections as I would have expected from such a long-standing relationship. I take a look at the Antiscion degrees/Solstice points in synastry to see if we can find powerful connections there. 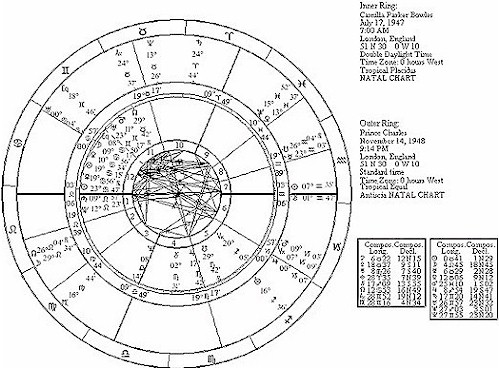 We find his Solstice Mars conjunct Vertex directly opposite her Venus-Moon. We also find his solstice Sun opposite her Saturn. We still do not find a strong Sun-Moon connection, however.

The connections between Charles and Camilla are most powerfully seen in parallels, or similarities–the Ascendant conjunction and the strikingly similar Venus-Neptune-Cancer/4th-Libra energy in both charts.

The announcement that their marriage is set to take place on April 8th, 2005, ignited my curiosity enough to draw up a possible wedding chart (note that this is a projection into the future, and the chart is drawn for high noon). 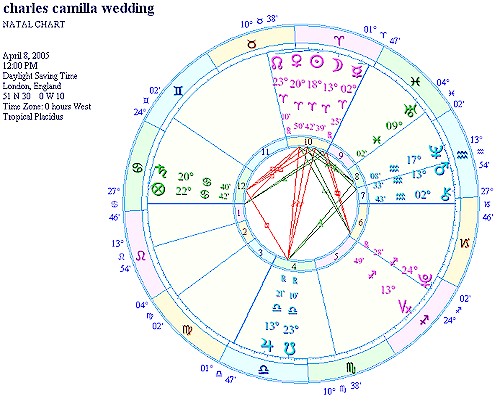 There is a very tight trine between Mars and Jupiter, and Mars is conjunct Charles’ Sun/Moon midpoint. If the vows are exchanged at noon, which is customary, the Moon is also tightly involved with the trine, as it would oppose Jupiter and sextile Mars. On its own, this configuration is fruitful and creative.

We can see the Moon applying to a conjunction with the Sun, and this is a waning Moon. Venus is conjunct the Sun and North Node as well. The Sun-Venus-North Node conjunction is supported by a trine from Pluto, and is challenged by a square from Saturn in the twelfth house. Mercury looks rather lonely, even if it is conjunct the Midheaven at noon on the projected wedding date. It is also retrograde. Uranus looks a bit lonely as well. The Mars conjunct Neptune aspect can be a challenging one, but it fits well with the prominent Neptune in both of Charles’ and Camilla’s charts.

I personally wouldn’t elect this chart as a wedding chart. This one fails many of the strengthening criteria for wedding charts. The Sun and Moon are in a waning conjunction. (It is preferable for the Moon to be waxing). Not only that, it’s a Solar eclipse. Some astrologers consider sign strength important, and Venus is in its fall in Aries, so it would be less than desirable in a wedding chart. I generally don’t worry too much about sign strengths, but I do know that Venus in Aries is at odds with the couple’s shared Venus-Cancer-Libra energy.

Although I consider Venus conjunct the North Node generally favorable, its square to Saturn presents perhaps too great of a challenge, especially given that same Saturn also conjuncts Camilla’s natal Sun and squares Charles’ natal Venus. Saturn also squares the Sun, and widely squares the Moon. Saturn rather strong in a wedding chart is quite desirable, but the pressure of Saturn in this particular chart seems to be undue. Most of the personal planets (with the possible exception of Mars) are challenged. I consider the synastry between Charles and Camilla somewhat strong, but a little wanting, and therefore would elect a particularly strong wedding chart for the couple, and this is far from that.

Update: The wedding was postponed 24 hours due to the Pope’s passing and funeral, which was probably a good thing, as the Sun and Moon were waxing instead of in a waning conjunction (solar eclipse). See the actual wedding chart of Prince Charles and Camilla here.