Some Astrological Notes about Lady Gaga: Lady Gaga is a straightforward Aries with an intense and gutsy Scorpio Moon. Her Mercury is in Pisces, her Venus is in Aries, and her Mars in Capricorn is practical and business-minded. 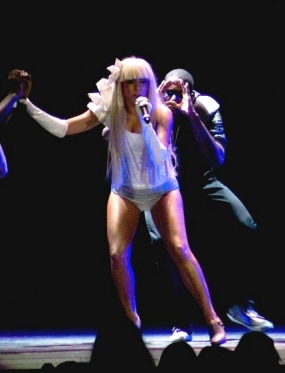 Lady Gaga’s birth date was recorded as March 20th instead of 28th all over the internet, probably because the entry on Wikipedia was March 20th (it has recently been corrected). I was surprised to see the mistake after recently returning from a Lady Gaga concert on March 28th, when it was announced that it was her birthday that day, and a birthday cake was presented to her. She also sings her birth year in one of her songs.

The following is a noon chart for Lady Gaga’s birth date. The Ascendant is, therefore, not correct.

Her Moon sign is definitely Scorpio, as the Moon was in Scorpio all day in her birth location.

She describes the theme of her debut album, The Fame, as about “how anyone can feel famous”, most evident in the song Beautiful, Dirty, Rich. As an Aries with Venus in Aries, she has no qualms expressing the fact that she loves money. She’s very charming in concert, particularly when she was presented with a birthday cake on stage and she teared up. I can’t count how many fans commented how “cute” she was.

Lady Gaga has written songs for Britney Spears, New Kids on the Block, and the Pussycat Dolls.

Lady Gaga released her debut album with Pluto transiting her natal Mars in Capricorn–a powerful transit indeed, offering a strong will to succeed. Note that Mars, as ruler of Aries, also rules her Sun and Venus.

Her Mars in Capricorn and Sun trine Saturn suggest that she’s not at all afraid of hard work.