“I’m so tired of crying and dreaming…”

Kurt Cobain may as well have been a Water sign poster-child. The former Nirvana musician had an astonishing number of planets in Water, including all of his personal planets. And, with his Sun, Mercury, and Venus in Pisces (and add to that a Sun square Neptune which attaches even more Piscean flavor to his chart), Kurt’s “sensitive loner” image was no doubt far more than just an image.

Some bio facts about Kurt: He was born February 20, 1967 in Washington. He first formed the “grunge rock” group, Nirvana, in 1987. He married Courtney Love in April 1992, and his daughter was born in August of the same year. He shot himself dead in April 1994, when he was 27 years old. Plenty of controversy surrounded his death  not everyone accepted it as a suicide.

Some Astrological Notes: If his birth time is to be believed, he had a Virgo Ascendant with Uranus and Pluto rising (conjuncting his Ascendant). Whether or not his time is correct, these transpersonal planets opposed his Moon, Mercury, and Venus. These latter planets, naturally, were descending in his chart. 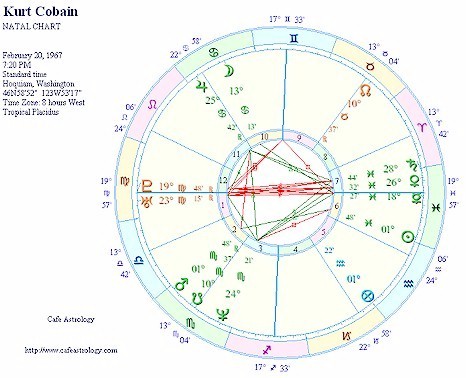 Kurt’s lyrics revealed pain in withdrawal, anger, and some cynicism (likely born out of extreme sensitivity). Despite his feeling of being all alone and disconnected, he managed to truly connect with, or “speak” to, a massive audience–even if it was a one-way relationship.

Besides the striking number of planets in water signs, a number of things stand out in Kurt’s chart. Among these, most interesting to me is Pluto rising (conjunct the Ascendant), but found in the twelfth house. I always consider planets just “behind” the Ascendant as quivering on the edge of expression. While Uranus is within approximately the same distance from the Ascendant as Pluto, Uranus is right “out there” for everyone to see. Pluto, on the other hand, would have been as strong an influence on Kurt’s character as Uranus was, and may even have been more so because it didn’t quite have the opportunity to express itself fully, “living” just below the surface in the private 12th house.

In any chart I look at, I consider a planet in this position (in the 12th house, conjunct the Ascendant) as a point of much preoccupation and, often, troubles in the native’s life. Any planet conjunct the Ascendant can show some level of immaturity, but its place in the 12th house also suggests a drive towards mastery or maturity. The resulting mix is unusual and contradictory. That planet’s energy is powerful in the native’s life, and has an almost self-conscious need to be seen and expressed. Still, it’s under the surface, on the verge of expression, yet not quite out of the closet.

In this case, Pluto is the rising 12th house planet. Pluto rules death and rebirth. A strong Pluto in any chart gives the native a powerful need to regenerate and a striving for meaning and purpose. It desires power, and is sometimes obsessively attached. It is dramatic in its need to get to the bottom of things, to bring to light our inner darkness. When the healing and regenerative process of Pluto is not understood or used constructively, the native can be self-destructive and have an overwhelming feeling of purposelessness. Pluto’s contacts and house position can show us where the native seeks power and control. Since the 12th house rules, amongst other things, isolation, we can safely assume that Kurt had a strong preoccupation with, and feelings of, being isolated. Pluto in this placement would show a tendency to self-analysis that is almost obsessive and often counter-productive, as well as a brooding quality. A compelling need to bring to light his own inner darkness would be emphasizeda need so powerful that it would have been a driving force behind almost all he did.

The strong Pisces, Neptune, and water in Kurt’s chart suggests enormous wells of sensitivity, creativity, and longing to belong. There’s a Pisces/Neptune yearning for connection to someone or something higher, a receptive and feeling Cancer Moon, combined with both the passion and the bite of Mars in Scorpio.

The sensitivity of the water signs is so great and the vulnerability to hurt so pronounced that, if the emotional reactions are not controlled and channeled properly, it can lead to a state of emotional instability and predisposition to being too easily influenced by the slightest wind that blows.

Feelings run deep for Water signs, sometimes to the point of being all-consuming. With the element of Air virtually missing in his chart, he would have a particularly difficult time dealing with others in a superficial or light manner. (“The worst crime I can think of would be to rip people off by faking it and pretending as if I’m having 100% fun.”)

“I’m so ugly, but that’s okay, cos so are you
We’ve broken our mirrors”

Uranus and Pluto rising in Virgo suggest a need to project himself as unique and deep in a nondescript (Virgoan) way. By emphasizing a glamour-less manner, he sought to express his rebelliousness and originality. It also suggests a desire to bring change, to go against what is expected of him—things that run counter to his need to belong shown in the strong Pisces emphasis. This simultaneous need to be one with humanity and to rebel against society may have been one of the sources for much inner conflict and restlessness.

Wherever you find Virgo, you are sure to encounter humbleness and some lack of self-confidence. In Kurt’s case, Virgo was rising (on the Ascendant). The Ascendant represents, amongst other things, our physical appearance and presentation to the world.

A strong need for relationship is seen with many planets near the Descendant and with Kurt’s many oppositions on the Ascendant/Descendant axis. Inner turmoil and unrest are evidenced by Uranus and Pluto opposing his many personal planets.

A grand trine in water can be found in his chart, involving Venus, Jupiter, and Neptune. Any grand trine reveals powerful possibilities and latent talents. This trine suggests an idealistic and romantic personality, capable of loving and feeling for not only individuals but mankind in general. These personality traits could be the source of much creativity. Love, empathy, and goodwill would generally be associated with this configuration. In the real world, grand trines can go “wasted” when there is an insufficient drive to put the talents they proffer to practical use.

Heavier Than Heaven: A Biography of Kurt… A revealing look at Kurt Cobain’s life, this biography focuses more on the man than the music he made. This is one of the more compelling biographies of Kurt out there.