Katie Holmes and Tom Cruise got engaged on June 17, 2005, in the early hours of the day. The proposal took place at the Eiffel Tower. Their age difference has been getting quite a bit of press (he’s 42 and she’s 26).

Tom has a Cancer Sun, with Mercury in Gemini, Venus in Leo, and Mars in Taurus. Because we don’t have a time of birth, we don’t know his Ascendant, and his Moon is in either Cancer or Leo. 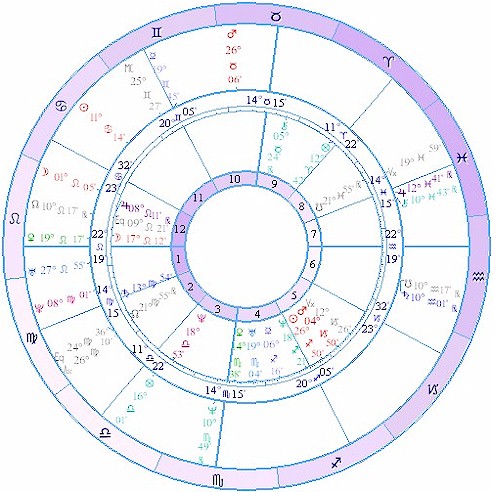 Because we don’t have a birth time for Tom, we can safely ignore the Ascendant, Midheaven, Vertex, and Part of Fortune in his chart (depicted in the outer wheel).

Katie’s birth data is accurate, so we will consider these points in her natal chart.

The first things I noticed in their chart comparison are:

The first point in the list above is common in synastry for infatuations and attraction. Tom’s Venus on Katie’s Moon and Ascendant suggests a real and palpable attraction. The attraction is immediate. With Venus mutually aspecting Neptune, this is a highly romantic and tender connection. With Venus-Neptune in synastry, it is especially important for a couple to maintain the initial innocence of their love for each other. It’s a dreamy connection, but it’s also very sensitive in the long term.

One of the most challenging interaspects in their synastry is the mutual opposition of Jupiter and Saturn. This suggests an ongoing tension in the relationship between freedom and restriction. There can be some real differences in personal outlooks that cause nagging problems.

Because it goes both ways and is thus repeated in their composite chart, this aspect represents an ongoing theme that should be handled sensitively in order that it doesn’t undermine the relationship. It is not unmanageable but should be identified and worked out. Each person holds onto their own set of principles, culture, and background quite defensively, and sees the other’s actions that contradict this basic outlook as threatening. They test each other’s faith or the “rules” they lay down whether they are explicit or implicit, by sometimes alarming displays of independence and freedom. There is a tendency to pick at each other’s basic philosophy of life, finding flaws in each other’s point of view.

This basic rebellion takes place in the realm of the intellectual rather than the personal, yet it can eventually feel very personal. The key to handling this aspect is to consciously invite tolerance into the mind and heart, especially when one feels inexplicably defensive about one’s personal beliefs. Couples with this interaspect should each ask themselves: What is it that I am protecting or defending, and is it so important that I will let it undermine my relationship?

Tom’s planets powerfully connect to Katie’s Ascendant and auxiliary Ascendants (Anti-vertex and Equatorial Ascendant). He affects her in a very direct and immediate manner, and the energy generated is powerful and personal. With Tom’s Saturn opposite her Equatorial Ascendant and Jupiter, we get more “clues” to the Jupiter-Saturn opposition described in detail above. Saturn here suggests that the couple naturally focuses a lot of attention on each other, excluding others and perhaps restricting their activities in order to do so. This feels right at the beginning, but can be felt as restricting over time, particularly on the part of the Ascendant/Equatorial Ascendant person (in this case, Katie).

Much of the chemistry in this chart comparison is positive, uplifting, and decidedly romantic.

See the computerized Romantic Compatibility Report for the couple for more details. 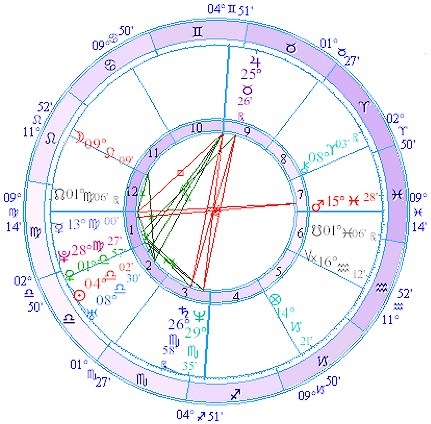 Some of the themes in the synastry of Katie and Tom are carried over in their composite chart.

The purpose of our analyses of celebrity relationships is not to make a decision on whether or not the relationships will last. They serve as examples of different approaches to chart comparison for students of astrology and serve as launching points for discussions on specific interaspects.