The Moon is New in Pisces on March 6, 2019, at 11:05 AM EST. Aligned with Neptune quite tightly (within a degree), sextile Saturn, sextile Mars, widely square Jupiter. Mercury is

Aligned with Neptune quite tightly (within a degree), sextile Saturn, sextile Mars, widely square Jupiter. Mercury is stationary retrograde at a critical degree (didn’t quite finish its transit of Pisces). 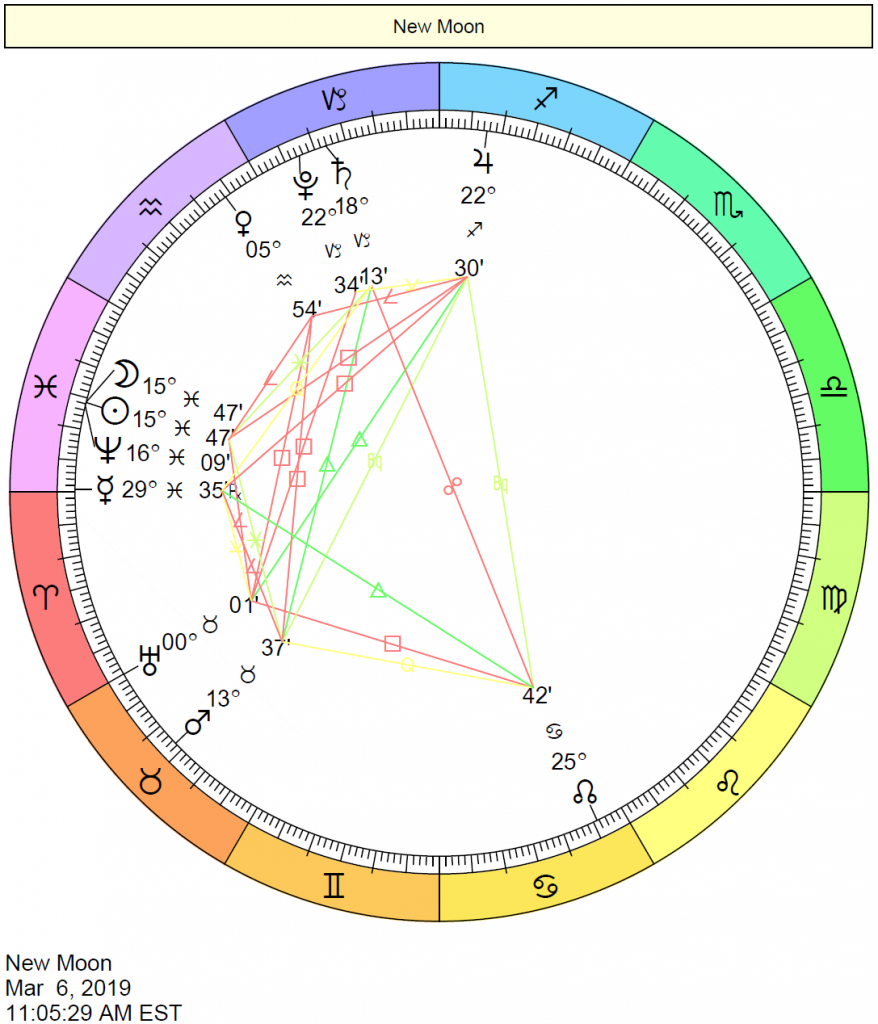 The New Moon in Pisces marks the beginning of a new cycle. The Aquarius New Moon cycle ends and the Pisces New Moon cycle begins. The New Moon in Pisces is a good time to commit to personal goals that express the positive energies of the sign of the Fish. These include taking a leap of faith, accepting imperfections in ourselves and in others as a different kind of “perfection,” starting a project that requires imagination and visualization skills, consciously putting time aside for peaceful and rejuvenating activities, and sharing a dream with another. With this potent Pisces energy, we have the chance to make important changes in our lives.

This New Moon is especially creative and imaginative with its conjunction to Neptune, square to Jupiter, and sextile to Mars. We are likely to feel very inspired, and this New Moon can motivate us to take a leap of faith, but we also check in with reality with Saturn’s sextile to the lunation. It also occurs shortly after Mercury stationed and turned retrograde and Uranus entered Taurus, and some instability or lack of clear judgment is likely now.

This phase of the Moon occurs at 15 degrees and 47 minutes of Pisces, affecting people born with personal planets and points at approximately 12 to 20 degrees of the Mutable signs (Gemini, Virgo, Sagittarius, and Pisces) most significantly.