Timing of a Relationship in Astrology

An Example of a Chart Drawn for the Beginning of a Relationship.

A friend came to me looking for help. She had begun a new relationship and wanted to know where it was headed. Of course, I did the synastry of the couple, as well as studied the composite chart. Another very handy tool (which is surprisingly revealing) is the chart of the first meeting.

This couple met online. We do not have the date of that first virtual meeting. However, I have found that when couples meet online, the date, time, and place of meeting in person is much more significant. As such, I drew up a chart for the first physical meeting, which was arranged.

Although some of the techniques used in the study of this “first meeting” chart are culled from the branch of astrology called Electional Astrology, the meeting was not arranged according to Electional astrology. In this case, we are looking at an event that happened in the past, and that was not planned using any astrological tools.

Note: The chart of the first meeting is very significant. Unfortunately, not everyone remembers the exact time they first laid eyes on their partner (and their partner returned the look). Sometimes even the exact date is uncertain. 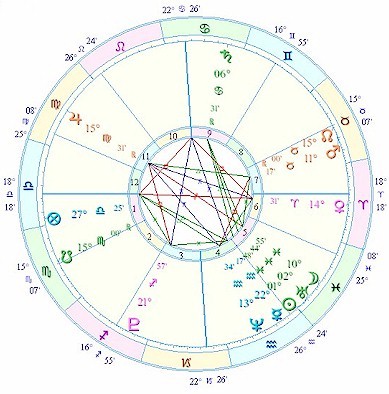 The relationship under study is, at this writing, ongoing. The chart of the first meeting is pictured at right. First things first, I looked at the phase of the Moon. The couple met at the time of a New Moon, when the Moon was separating from the Sun with an orb of about 9 degrees. This is actually a good time to begin anything that you want to last, or to play out over time. The New Moon was in Pisces (

), which is a warm water sign, conducive to emotional alliances, romance, and a spiritual sense of connection.

The first applying aspect of the Moon is, in this case, a strengthening sextile to Mars, within 1 degree orb. This symbolized the initial quick start (the couple had immediate, powerful, and passionate feelings for each other, and they expressed these without reticence). Both told each other how surprised they were with regards to their feelings for each other being immediate and powerful. This was a very favorable start.

I looked to the Moon’s separating aspects. This is important to me, as it offers information on what the individuals involved brought to the relationshipwhat the conditions were surrounding the relationship in the immediate past, and what kinds of relationship expectations were carried into the meeting. Although this may be overlooked, I find it extremely illuminating. In this case, the Moon (

) is separating from the Sun conjunct Uranus, which suggests to me an expectation or hope that the relationship would be a powerful one (Sun), and that it would be exciting and/or unconventional and nontraditional (Uranus). A unique and strong friendship was hoped for, and this was certainly the case. Both individuals involved were meeting with the hopes to find a friendship that was not a binding one (not destined for marriage) but one that would bring excitement to their lives. This was established before the first physical meeting, and was based on the individuals’ current life circumstances and current relationship needs. The Moon was also separating from a sextile to Saturn, and indeed the individuals were looking for a relationship that was enduring at the same time. Neither was interested in a completely casual fling. Both hoped for a relationship that would last.

), it is neither too late nor too early in degree. (When the Ascendant is in the last 3 degrees of a sign, I consider the situation similar to that of a Void of Course Moonit is unlikely the undertaking will last or be of significance). The Ascendant is favorable to the desired outcome.

I looked to the Sun (

) offer clues to the general nature of the new relationship. The Sun forms a tight applying aspect (conjunction) to Uranus in the fifth house. This perfectly describes the relationship these individuals both hoped to begin, and did create. Because of their life circumstances, responsibilities to career and children and so forth, both individuals wanted a non-traditional friendship. They had no expectations of eventually living together or hooking up with their eye on marriage. They expected to see each other occasionally, when their schedules permitted. If these were not the expectations, the Sun conjunct Uranus might be considered a difficult aspect, and might symbolize a relationship that was erratic or undependable. In this case, however, this planetary picture works well.

I looked to planets on the angles. Chiron is conjunct the IC in the 4th, which suggests an emotional bond. Venus is conjunct the DSC, indicating the individuals’ mutual value of partnership.

Since this is a love relationship, we look to the condition of Venus. It is in Aries and forms a separating sextile to Neptune, as well as a wide, but applying, trine to Pluto. Both aspects suggest a romantic and intense (in a pleasing way) relationship. Venus also forms an applying inconjunct to Jupiter, which is another strengthening aspect, although it might suggest some overdoing and excess. (See our article about inconjuncts for more information about this aspect). This jives with the synastry between the couple (they share a double conjunction of Sun and Jupiter in synastry).

I looked to house emphasis. Both the Sun and the Moon are in the fifth house of love, romance, and creativity! Uranus is there as well, and Uranus rules the fifth house. There will be no shortage of fun and good humor in this relationship, and the focus will be on having a good time together. This is a very romantic position. Not only that, Libra is on the Ascendant, with the ruler, Venus, conjunct the Descendant! Both the 5th house of romance and entertainment and the 7th house of partnership are highlighted. Even though the 11th house is unoccupied, Leo is on the cusp and its ruler, the Sun, is in the 5th house conjunct Uranus (which certainly has an 11th house flavor). This 11th house/Uranian flavor adds the possibility for a unique friendship in which the individuals accept each other for what they are, without too many demands. In the synastry of the individuals, the 11th house is also emphasized, one such connection being the female’s Sun falling in the male’s 11th house.

The chart certainly has a Pisces sign emphasis! Faith, compassion, and sensitivity should characterize this relationship. Sensitivity to each other’s feelings will be a highlight. The thing to watch for would be too many ups and downs and vacillation. Also, some communication problems are possible when the individuals are not listening to their intuition. However, the Pisces planets are strengthened by the trine from Saturn in Cancer.

Mars is conjunct the North Node, which implies the relationship will be conducive to spiritual growth. This relationship is moving forward, not pulling the individuals backwards into negative habits and patterns. It is important to note, however, that a powerful Node connection between two individuals can also be quite challenging.

These are powerful configurations that pull up evocative imagery!

I found an aspect pattern in the chart of the first meeting: the Yod. This suggests a relationship that will require many adjustments over time. The Moon in Pisces is at the Yod’s “release point” which suggests to me that the adjustments made in order to maintain the relationship will be emotional in quality, and undertaken in a willingly self-sacrificing, trusting, and compassionate manner.

On the negative side:

The final applying aspect of the Moon is a square to Pluto. This might indicate that the relationship will end in loss. [Note that in electional astrology, many astrologers use classical aspects/planets. Pluto would not be considered with this method. Rather, the final applying aspect of the Moon would be its opposition to Jupiter.] This aspect necessitates the need to look for potential problems or issues in the chart. Neptune is involved in a square to both Mars and the North Node, and is figured in the chart’s Yod. Although the relationship is sure to be very romantic, there can be some potential for disillusionment and disappointment. Not only that, miscommunication is quite possible. Of course, every couple deals with communication problems, but when Neptune is highlighted and difficult, these problems can take on challenging proportions.

I looked to the positions of the planets in the first meeting chart in relation to the individual’s charts. These would be the transits each individual was experiencing on the day of meeting. Why is this significant? The conditions surrounding the individuals at the time of meeting act as an imprint of the expectations of the relationship.

The man in the relationship was receiving the most significant transits at the time of the first meeting, with some strong Saturn transits to his personal planets. Saturn is figured in the woman’s chart as well, but not to the same extent or significance. Saturn is somewhat challenging in the synastry of the individuals as well. This suggests to me, given all of the information I gathered so far, that the relationship may be “heavier” than expected or wished for. There is considerable good will indicated in both the first meeting chart and the synastry, so perhaps there will be an inherent understanding and acceptance that the chemistry between these people would be more suited to a traditional partnership rather than a non-traditional romantic friendship. There is a bit of a mismatch here, especially, in my opinion, on the part of the man. With Saturn figuring strongly on his side, he may feel more tied, responsible, and even burdened by the relationship than had been planned for. It is difficult for me to see bitterness between these people, and I do see tremendous potential, including ties that transcend the normal. This can definitely work. We have no idea how the relationship will pan out. My educated guess, however, is that no matter what its outcome, this is a relationship that will be unforgettable for both people involved, and will be largely beneficial to both parties. “Good will” reigns, and will reign, indefinitely in the chemistry between these people.