Love in the Zodiac: How the Stars Affect Your Relationships

Love in the Zodiac

When you meet someone and chemistry works its magic, there is more to your astrological compatibility than just your Sun Signs. 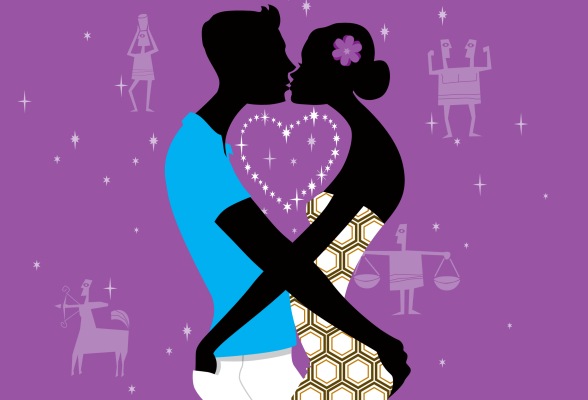 Certainly, if you have compatible Sun Signs, you both have a head start. You will have compatible goals and career preferences. We measure Sun Sign compatibility by the elements of the signs. The fire signs are Aries, Leo and Sagittarius, and these active exciting signs are indeed compatible with each other.

The Air signs, Gemini, Libra and Aquarius, will have excellent communication with each other. The Water signs, Cancer, Scorpio and Pisces, will all be emotionally in tune with each other, while the Earth signs, Taurus, Virgo and Capricorn, will share a mutual desire for stability and security.

But this alone is not enough to ensure a relationship. Millions of people share your Sun Sign and many of these would be completely wrong for you. You will never even meet most of them, because there will be no other connection in your horoscopes. This is the crux of the matter — if you meet someone, the signs are already there in both your horoscopes.

You have strong ties in your natal charts and when these ties are accentuated by a transiting planet or three, the meeting takes place. How it will turn out — whether this is The One you have been waiting for — all depends on those interconnecting aspects between your natal charts.

The strongest factor in a relationship between couples is a link between the Sun and the Moon. This is usually a strong indicator of marriage and setting up home together. The Moon is the emotion factor in any chart, the place where we build memories and a home of our own. The Sun is our primary goal in life. When we meet someone and fall in love, all emotions are engaged and our primary goal becomes this other person.

The traditional manifestation of this link between charts is the Moon in a woman’s chart and the Sun in a man’s chart. The two will be in strong aspect, signifying probable marriage, and how that will work out for them depends on the aspects between the two and the signs they are in.

For example, the Moon in Cancer in the woman’s Chart and the Sun in Pisces in the man’s chart would be as good as it gets. Marriage would be assured. The aspect is a favorable trine, and the signs are compatible. The warm, nurturing character of the Cancerian Moon would find fulfillment looking after the artistic, dream seeking Pisces Sun.

If the charts linked a Leo Moon with a Sagittarius Sun, the free wheeling Sagittarian would find warmth and comfort with the Leo, and the Leo would take pride in the Saggitarian’s accomplishments. A Taurean Moon and a Capricorn Sun would build a wonderful, materially secure life together, while the Libran Moon and the Gemini Sun would be the most sociable couple in their neighborhood.

This is how planetary attractions play out. The astrologer looks at the planets, which represents the focus of the relationship; the signs, which show the way it works; the aspects, which show if it is going to be easy or challenging; and finally the houses, to see where the couple share values.

If there is a challenging aspect between the Sun and the Moon between your charts, then there will be tension in regards to the emotional make up of the Moon, and the goals of the Sun. For example, if our Cancerian Moon fell in love with a Libran Sun, he or she would quite literally be all at sea. The Libran Sun is sociable and outgoing; the Cancerian Moon is focused on home and domestic matters. The Libran is Air, the Cancerian is water. It could get stormy!

If the Cancerian Moon picks an Aries, there could be even more trouble. This is fire and water, and the emotional Moon will be trying to calm the fires of the Arian Sun — with little success, since this is what drives an Arian Sun. If the positions were reversed, and the Moon was in Aries, the Cancerian Sun could find those powerful fiery emotions too hot to handle. After all, the Cancerian Sun just wants a quiet life.

This is not to say these relationships can’t work — many do, quite successfully. But both Sun and Moon have to compromise, and employ a lot more give and take. Sometimes a stressful connection can be turned to advantage. For example, a Cancerian Moon opposing a Capricorn Sun can provide a loving home for the Capricorn Sun as the perfect antidote to those ambitious career goals.

While tradition dictates these aspects between the Sun and Moon relate to heterosexual partnership, with the Moon representing the woman and the Sun as the man, in real life, of course, relationships are as varied as the people in them. But the interpretation of the Moon and Sun Signs will be the same, whether it is a man and a woman, or two men or two women. The emotional tenor of the relationship will be brought by the Moon, and the goals of the couple will be expressed most forcefully by the Sun.

If the Sun and Moon promise marriage, Venus and Mars promise, at the very least, an unforgettable love affair. Again, it does not really matter who has the Venus and who has the Mars — if they are in aspect to each across the charts, they will provide an interpretation of the relationship — in particular, what attracts the two to each other.

Harmonious aspects between Venus and Mars make attraction easy — this is the “some enchanted evening” attraction, when two people spot each other across a crowded room and know immediately that they were meant for each other. But will it be exciting, emotional, a gabfest or comfy as an old shoe? That depends on the elements. A Fire attraction will be like a fireworks display, a Water attraction will be deep and meaningful, an Air attraction will be the meeting of minds, while an Earth attraction will probably see you both shopping for furniture next day.

As with the Sun and Moon, the astrologer is more interested in the sign, house and aspects of the connection between Venus and Mars rather than the genders. The Moon will always be the Yin factor, the Sun the yang factor — so with Venus and Mars. Venus shows attitudes to love and romance, while Mars supplies the energy and passion. These two can be switched — a Venus in Scorpio is far more likely to provide the passion in a relationship than a Mars in Cancer — the two will be emotionally compatible, but this Mars will be protective and nurturing.

Venus in Gemini can be a real flirt, which may disconcert diplomatic Mars in Libra but will amuse eccentric Mars in Aquarius. The signs, however, are all Air and all compatible — where these combinations will really shine is in being honest and open with each and being able to talk about anything at all.

Challenging aspects offer a real challenge between Venus and Mars, but great passion and excitement as well. Imagine Venus in Aries and Mars in Libra — these two will argue all the time, and headstrong Venus won’t listen to peacemaker Mars, but when they put the arguments aside, sparks of quite a different kind will fly.

When two people meet, it is no astrological accident. Often two other points in the chart, called the Nodes of the Moon, are activated. The North Node of the Moon and the South Node of the Moon are exactly opposite, and are powerful when one relationship ends and another “prior to, or right on the end of the first relationship” begins. The North Node ushers new people and experiences into our lives, while the South Node shows what is passing away.

We will attract what the North Node shows, and gradually move away from what the South Node shows, especially when these points are activated by an important planetary transit.

The Seventh House, while it is important in describing what the native can expect of marriage, and in some cases, whether marriage will even take place, may also be activated when we meet a life partner. Yes, that old “when the moon is in the seventh house” song does actually have some validity, at least in personal relationships.

The outer planets are often checked as well between charts to give some idea of the outcome of an attraction. Uranus figures strongly in break ups and divorces, so a strong Uranian connection between charts may indicate a short lived relationship. Neptune brings romance to the mix, but if negatively charged, he can also indicate lies and deception. Pluto can indicate an obsessive or uncomfortable element. Be careful with Plutonian relationships.

As you can see from this small sample, there is a great deal more to attraction and relationships as a whole than merely compatible sun signs. That’s why, if you are serious about someone, it is wise to get your natal charts made up and have a professional astrologer compare them. The insights could make all the different between a relationship based on understanding and one based on blind passion.

Read in-depth interpretations of Venus in the Elements (Venus in Fire, Venus in Earth, Venus in Air, and Venus in Water). 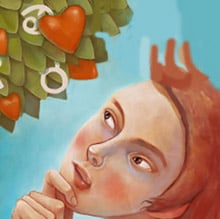