The flash and bling of a finely faceted gem set in precious metal might appeal to the typical birthstone fancier. Just as often, though, a person might prefer a more modest, quiet, and affordable stone. The alternate list of birthstones includes many gems, lovely in their own right, that are historically valid representations of the calendar months and are often a better fit for men’s jewelry. 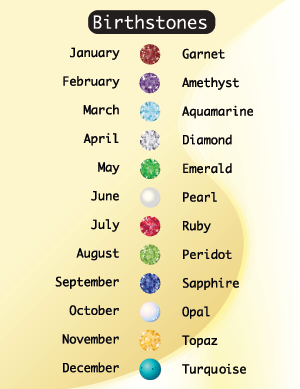 Rose quartz pairs with garnet as the birthstone for January. This quartz can be tumble polished or made into beads or cabochons. The soft pink glow complements most color schemes.

The man or woman born in February might choose a glossy black onyx cabochon for a ring, rather than the traditional amethyst. Plain or banded with white, onyx makes a striking piece of jewelry.

Another stone in the silicate family is bloodstone, which was supplanted by aquamarine as the birthstone for March. In medieval times bloodstone was known as the ‘martyr” stone, which is perhaps more appropriate for March-born Pisces. Its red spots against a green background were said to represent the blood of Jesus Christ.

Rock crystal quartz has served as a decorative stone for centuries, and is appropriate for those born in April. Then and now, its clarity has charmed and mystified and earned it a reputation as a channeling medium and seer stone.

The rare opalescent apple green of chrysoprase is a formidable rival to emerald as the birthstone for May. It is the most valuable of all chalcedony quartz varieties, and derives its color from chromium.

June offers three choices for birthstone, alexandrite, pearl and moonstone. Pearl is an organic substance formed inside of an oyster or mollusk. There are both freshwater pearls and saltwater pearls. The distinction between cultured and natural pearls has blurred and both are treasured for their luminescent beauty. A third choice for June is the moonstone, available in many shades but the blue and rainbow varieties are the most popular. Moonstone was formed from two types of feldspar. When light falls between the stacked layers of orthoclase and albite, the resulting scattered light produces a delicate play of colors known as adularescence.

Reddish brown carnelian, along with ruby, is a birthstone for July. This variety of chalcedony is found in the oldest examples of jewelry, that crated by the Sumerians, Egyptians, Hebrews, Greeks, Romans and Tibetans. In the Bible, carnelian is mentioned as one of the stones in Aaron’s breastplate.

Sardonyx is the alternate birthstone for August. It is far less costly than peridot but has a noble history. Although ancients regarded onyx and sardonyx and two different minerals, they are the same except for color. Sardonyx is a sandy reddish brown. Both are agates formed in even layers which makes them useful for carving cameos, an art that reached its peak during the time of the ancient Romans.

Lapis Lazuli is a rock not a mineral. This September birthstone is comprised of several minerals, including lazurite. Ideally, this bright blue gem sparkles evenly with pyrite inclusions.. Lapis beads six thousand years old have bean found in Afghanistan, an area which mines this stone to the present day.

October features two distinctive gems: opal and the alternative pink tourmaline also known as rubellite. Tourmaline is found in various colors including bi-color and multi-colored specimens. It can be dichroic which means that it changes color as it is turned toward or away from the light source. The skilled faceter keeps this in mind as he aligns the cut of the stone.

Citrine rivals topaz in clarity and beauty as the stone for November. Natural citrine is rare. Its pale gold color lacks the reddish or brownish tinge present in the stones produced by heat treatment of amethyst.

The perennially popular turquoise is one of three birthstones for December. The color can vary from powder blue, sky blue and blue-green. It is a fragile stone, slightly harder than glass, but has been used as a decorative stone for thousands of years, notably by the Persians, Egyptians and Southwest Native Americans. In 2002 the American Gem Trade Association added a new stone to the list of traditional December birthstones. Tanzanite was supposedly discovered by Masai herdsmen in Tanzania thirty years ago and has since become popular among collectors. Its color is a deep blue-purple.

If your tastes do not run toward either the traditional or alternate birthstones for your month, do not worry. There are other lists: mystical, ayurevedic, Hindu, planetary, talismanic, the stones of the zodiac, the stones recognized by ancient cultures such as the Hebrews, Romans, Russians, Poles, Italians and perhaps others. There are also stones to mark the seasons, the days of the week, and hours of the day. There is sure to be something for everyone in the world of birthstones.

For the birthstones most associated with your zodiac sign rather than birth month, see our article: Astrology and Gemstones: What’s Your Bling? 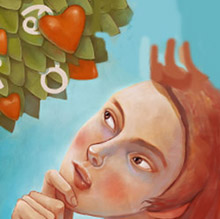