Astrology of Relationships: Break-ups & Transits to the Moon

Celebrity Break-ups and Hard Outer Planet Transits to the Moon

The Moon in astrology represents our deepest personal needs and emotions, and both our “inner child” and our “inner mother”. Just as the Moon circles the Sun, in a symbolically protective manner, and reflects the Sun’s light, the Moon in our chart shows how we protect ourselves, as well as make ourselves feel secure, comfortable, and safe.

It is no surprise that when transiting outer planets form hard aspects to our natal Moon, our very sense of security and comfort comes under question, at least for the duration of the transit. Although hard aspects from such planets as Pluto (the planet of transformation, deaths, and rebirths) and Saturn (the taskmaster) don’t always express themselves as break-ups, oftentimes they occur during painful life transitions. Such was the case for Jennifer Aniston, Nicole Kidman, Princess Diana, Farrah Fawcett, and Mia Farrow.

On January 7, 2005, Jennifer Aniston announced her separation from Brad Pitt, and filed for divorce in March. Jennifer was, and still is at the time of this writing, going through a transit of Pluto conjunct her Moon–an especially significant transit for Jennifer because she was born with a natal square between Pluto and the Moon. 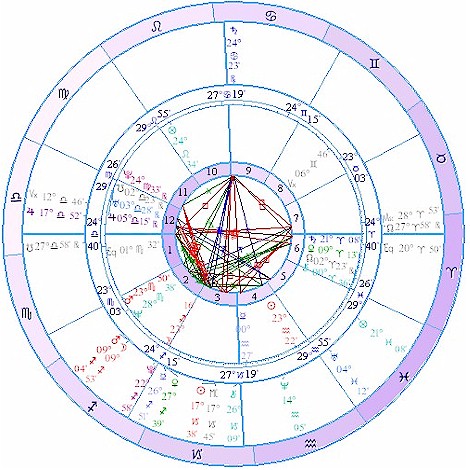 Pluto transiting conjunct the Moon is a time of emotional transition and intensity. It can be a time when we feel emotionally manipulated and we confront our deepest, most vulnerable parts of ourselves. By the end of the transit, however, we will have gathered tremendous emotional strength and even fulfillment from our personal struggles.

Jennifer is going through other transits, of course–some of which are particularly significant, such as Saturn conjunct the Midheaven. Because she has Cancer on the tenth house cusp (the Midheaven), which is ruled by the Moon, the Pluto transit is especially public. Transits, in general, tend to be particularly significant when they involve planets that are in aspect natally, and in Jennifer’s case, she has Moon square Pluto in her natal chart.
Nicole Kidman was also going through Pluto transiting conjunct her Moon around the time of the announcement of her separation with Tom Cruise.

When Farrah Fawcett split with Ryan O’Neal in 1997, after a long-standing marriage, Saturn was transiting square her Cancer Moon, and Pluto was transiting inconjunct her Moon as well. In her natal chart, her Aquarius Sun opposes Pluto rather tightly, so she is no stranger to Pluto energies.

Mia Farrow’s long-standing marriage to Woody Allen began to break down in 1989, and “blew up” when she found Allen’s pornographic pictures of her adopted daughter in January 1992. Allen’s affair with her daughter was uncovered. Both transiting Saturn and Neptune were conjuncting her Moon in Capricorn throughout 1989, although transiting Pluto formed a sextile to her Moon. When they divorced, Pluto was transiting square her Sun.

Transiting Pluto formed a square to Princess Diana’s Moon at the end of 1992 and through 1993. During this time period,  her official separation from Prince Charles was announced, and transcripts of intimate phone calls between Charles and Camilla were released. Her chart, along with transits at the time of the official separation, follows: 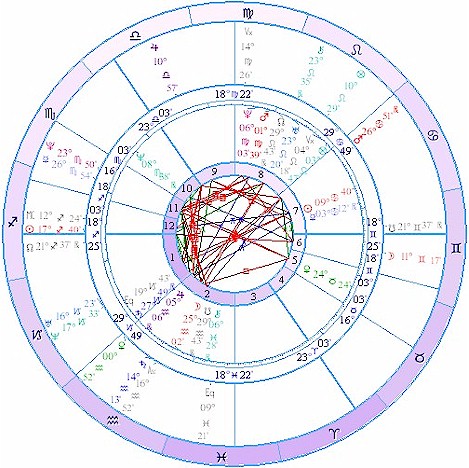 We’ve focused on hard outer planet transits to the natal Moon in women’s charts in this article. Note that the Moon has the same symbolism for everyone, regardless of their gender. However, because in our society women tend to more naturally identify with the Moon, hard transits to it are common at times when significant personal relationships are under turmoil.