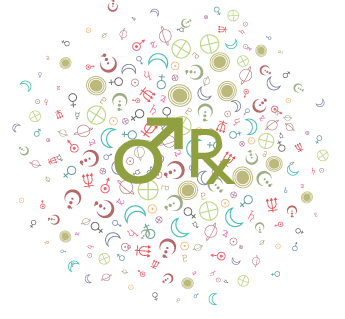 Mars spends its full retrograde cycle in the sign of Gemini during this cycle.

The Sun opposes retrograde Mars on December 8th, 2022 (the Sun only opposes Mars while Mars is retrograde). The Moon aligns with Mars at almost the same time–it’s a powerful Full Moon as it aligns with the Sun-Mars opposition.

When Mars is in its retrograde cycle, we must re-assess our current projects, our approach to getting what we want, and our desire nature. Rather than directly assert our desires, we tend towards introspection.

While Mars in direct motion is direct, straightforward, assertive, and aggressive, while it’s retrograde, Mars energy is essentially turned inward–it’s internalized, intensified, personalized, and perhaps pressurized. We can be hesitant about taking action, second-guessing our instincts or our natural impulses rather than acting upon them.

The way we react to situations under normal conditions doesn’t necessarily work for us now, or we don’t exactly trust our instincts during the retrograde phase of Mars.

When we internalize anger, there can be some rather challenging byproducts, such as tension, resentment, depression, apathy, and even some paranoia. On the other hand, we might choose to personalize it and make it more intimate.

With Mars retrograde in Gemini, there can be some stalling of intellectual and mental initiatives. Health issues may be a factor (especially in areas ruled by Gemini, including the lungs), and accidents a possibility throughout the Mars retrograde period.

Our goal during a Mars retrograde period should not be, however, to simply sit on our impulses or to squelch our enthusiasm. Rather, it should be to better understand our impulses, survival instincts, anger, sexuality, inner courage, and the ways we go about getting what we want from life. The cosmos are asking us to look before we leap rather than throwing ourselves into action, just for the time being

Learn more about the meaning of Mars Retrograde.