Your own planet, Pluto, will continue on his path through Sagittarius during 2005, putting laws, education and politics at the forefront of everyone’s minds — but yours in particular. You’ll be even more likely than usual to get involved this year, but try not to get carried away. Remember, others do have a right to their opinion — even if they’re wrong!

Your urge to lecture — and to go on at length, truth be told — will be especially strong during January, when several planets in Capricorn will join forces with the new Moon to make it next to impossible for you to keep quiet. The first half of this season will seem to rush by you, but late February and March are times you’ll want to remember. Slow down and enjoy this time to its fullest.

The pace of life will pick up dramatically during spring, especially when it comes to relationships. In particular, during April the lunar eclipse of the 24th will illuminate this area of your life, bringing with it the chance to either become closer to your current partner or to find someone new who’ll be in your life for some time to come. If you’ve recently come out of a relationship, go slow.

During summer, your focus will turn to an emotional matter you were sure had long since been resolved. If this issue comes around again, don’t be upset. Use the energy of the full Moon of July 21st to talk it all out and get it settled, once and for all. You can reach a happy compromise if you’re willing to let go and let the universe drive. The full Moon of September 18th will bring you a chance to become friends with a whole new peer group. Go ahead and get involved. Expand your horizons.

The solar eclipse of October 3rd and the lunar eclipse of the 17th will both affect your subconscious desires. You’ve always been an expert in that department, but now — well, now, you’ll want more than just physical intimacy. You’ll be after true intimacy on all levels, and you won’t stop until you have it. That goes double for your encounters with family members around the holidays. 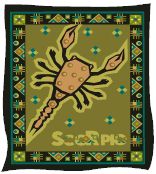 January is a big crazy month for you, as Capricorn gets up in your business and creates more new projects than you know what to do with. Fortunately, you’ll find that keeping your bosses happy is as easy as smiling, and you’ll maintain the good feelings through the rest of the winter. Things will settle down in February, and you’ll get into a good groove through the end of March.

You’ll feel like shaking things up as spring starts blossoming. You might want to switch workgroups or office mates — or go nuts and start fishing around for an entirely new job. Whatever happens, it’ll be the interpersonal connections that matter most to you. As your ruling planet Pluto makes its pokey way through Sagittarius, you might find yourself drawn toward advanced education.

Expect a blast from the past this summer. You might get an intense feeling of nostalgia around the full Moon on July 21st — it could be that you start thinking about the path not taken. Take time to think it all out and you’ll find a great way to synthesize the passions of youth with today’s practical necessities. Collaborations become big news in late September, and you might get involved with a new team.

A quiet lunar eclipse slips under almost everyone’s radar on October 17th, but you’ll pick up on the deep vibrations and find yourself reenergized. You’ll have a new attitude toward your coworkers and will find ways to squeeze extra work out of anyone. Your management style will be well regarded throughout the fall and beyond. The holiday season will give you a chance to recalibrate the balance between your work life and personal life.

The New Year finds you in a philosophical mode, investigating and questioning anew things you may have accepted or taken for granted for some time. Naturally, you’re probing the realm of romance as well — and in January you’re having amazing realizations. There are practically cartoon light bulbs popping on over your head, illuminating your love life in most interesting ways. Share your revelations (especially on the weekend of February 18th) — and watch as the power of your intellect heats things up (particularly at the end of March).

April brings a little less conversation and a lot more action — call it the power of spring. Love is in the air and life is all about relationships, and you’re well aware of your power to make your fantasies into reality. Don’t miss an especially spectacular opportunity to do so around April 24th and again around May 23rd. If you’re coupled up, you can transform and reintensify your relationship now — and if you’re single, the world had better watch out.

Some new ideas are brought into your personal romantic arena in early summertime, as well as some inspiring new people. At the same time, an old issue in your love life could revive itself, to your consternation. Don’t forget to learn from the experiences of those around you, and don’t forget to maintain forward motion. Your natural passion regains momentum the weekend of July 15th — then your intuition guides you to exactly where you want to be at the beginning of August.

The summer heat sizzles long into fall for you. In mid-September, you’re deeply involved in investigating some of the many mysteries of love, while October sees your desires really fired up (and for you, that’s saying something). You won’t accept anything halfway, nor should you. November 1st looks intense — take advantage of it. Watch your communication, especially in romance, from November 13th through December 3rd, when Mercury retrogrades through your very own sign; little mix-ups are inevitable, but you can prevent full-blown breakdowns. Get what you want the weekend of December 16th (and don’t be surprised if it comes in a strange package).

Back to Yearly Horoscope 2005 Main